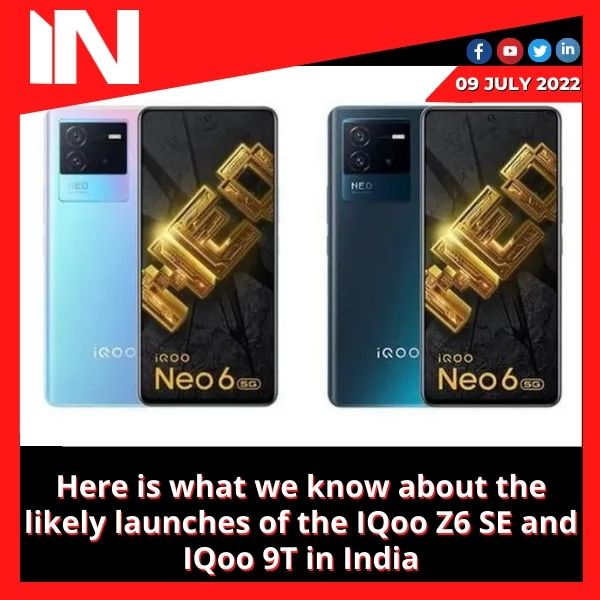 After launching the much-awaited Neo 6 in India, looks like iQoo is preparing to release other smartphones. As per the latest report, iQoo Z6 SE has been spotted on the company’s Indian website. Additionally, the company is also said to be working on a flagship device that would feature Qualcomm’s latest and the most powerful chipset, the Snapdragon 8+ Gen 1 SoC. Keep reading to know more about smartphones.

The debut of the iQoo Z6 SE in India is anticipated for next month.

RootMyGalaxy has released a report that claims that the iQoo Z6 SE moniker has been discovered in the website’s source code, thanks to tipper Paras Guglani. Although the smartphone is anticipated to launch in August, little is known about it at this time. The Vivo-owned business hasn’t also released any information about the phone.

The iQoo 9T is a different smartphone that might be released soon. According to recent sources, the smartphone will reportedly debut this month and will use the Snapdragon 8+ Gen 1 SoC. The iQoo 9T may also have a 6.78-inch AMOLED screen with a 120Hz refresh rate. According to rumours, the gadget would also allow 120W fast wired charging.

Overview of the IQOO Neo 6 specifications
A 120Hz refresh rate is supported by the 6.62-inch E4 AMOLED display that comes with the iQOO Neo 6. The display has a 398 pixel per inch resolution, a 360 Hz touch sampling rate, and a maximum brightness of 1300 nits. The Snapdragon 870 SoC, a 5G CPU, is one of Qualcomm’s most potent mobile chipsets and powers the smartphone. The chipset features A77 architecture, clocks at at a maximum of 3.2GHz, and achieves a score of more than 740K on the Antutu test.

The computer comes pre-installed with a skin based on Android 12. The company offers two models in India with different amounts of storage: one with 8GB of RAM and 128GB of UFS 3.1 storage and the other with 12GB of RAM and 256GB of storage. The smartphone contains three camera sensors on the back panel: an 8MP wide-angle sensor, a 2MP macro sensor, and a 64MP main sensor with optical image stabilisation. The smartphone sports a 16MP front-facing camera for snapping selfies.

According to leaked Apple iPhone 14 series cases, the 14 Pro Max sports a slightly larger camera island than the 14 Pro