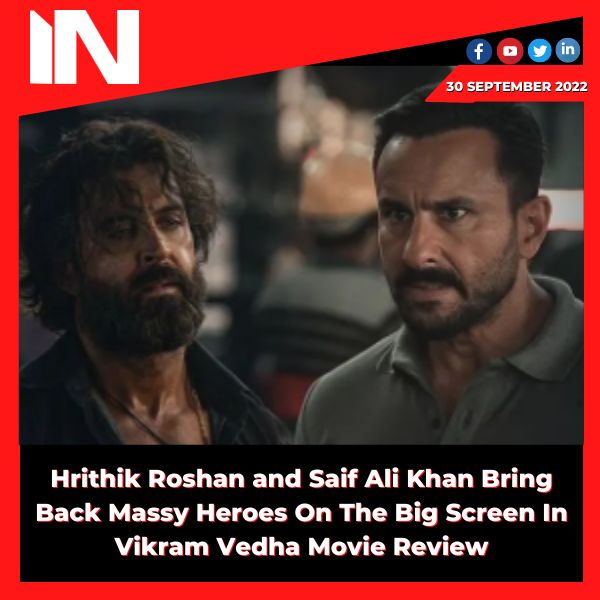 When Hrithik Roshan appeared on screen for the first time as Raj Chopra in Kaho Naa… Pyaar Hai in 2000, there were nothing short of explosions in the theatres. The actor charmed the nation with his endearing grin and skillful performance. Those memories came to mind as I saw Hrithik enter and exit scenes in Vikram Vedha while still flashing the same endearing smile that has only gotten better with time. Hrithik and the swank Saif Ali Khan team together to provide the mass-market movie that Bollywood has been waiting for in this remake of the same-named Tamil flick.

I have to admit that I did not see the original movie before writing the review. Before the new Vikram Vedha was out, I had the temptation to watch it, but I resisted because I wanted to see the world that Pushkar-Gayathri, a filmmaker team, created for Hindi filmgoers instead. In retrospect, I believe I am glad I made the decision to resist the impulse.

The idea of Vikram and Betaal from folklore serves as the foundation for Vikram Vedha. According to mythology, Vikram journeys into the deep, dark forest to free Betaal, a menacing ghost bound to a tree, so that he might give him to a saint and gain aid for his country. In the realm of Pushkar and Gayathri, encounter specialist Vikram (Saif Ali Khan) goes into the seedy underbelly of Lucknow’s mafia scene to track down Vedha Betaal (Hrithik Roshan).

Similar to the proverbial story, Vikram is entangled in Vedha ‘Betaal’s’ tales, forcing him to pick between the correct and incorrect responses. If the question is correctly answered, Betaal—in this case, Vedha—finds his way back to his tree, forcing Vikram to begin dragging him.

However, in the movie, questions are followed by a morally ambiguous story that is told in chapters, all of which serve to advance the plot. Vedha gradually and subtly alters Vikram’s rigid views while demonstrating to him that everyone, including Vikram, is grey in the process. Even up until the last twist, the change in attitude changes the course of the movie.

Despite my deliberate decision to avoid giving away any plot details, I can tell you that Vikram Vedha is a visual treat, especially for Hrithik Roshan fans. PS Vinod, the director of photography, aids Hrithik in once more becoming a popular hero. Hrithik’s popularity is celebrated in every frame. Hrithik is portrayed as a larger-than-life figure in a number of wide-angle and slow-motion shots that Pushkar, Gayathri, and Vinod have added.

Saif and the trio are able to counterbalance Hrithik. Even though Vedha and his stories receive a little more attention in the movie, Vinod aids Pushkar and Gayathri in transforming Saif into a flawed hero. The entire section that builds the film’s central conflict and the sequence where Saif and Hrithik split the screen in the film’s conclusion are the two Saif-centric scenes that particularly stuck out to me.

Strong music by Sam CS elevates the cinematography. Long after the movie is over, the music still plays in your head. Vikram Vedha’s secret weapon, in addition to the audiovisual experience, is a solid narrative. The story, which was written by Pushkar-Gayathri, never has a dull moment. Every scene that is described on the storyboard is ensured by Pushkar and Gayathri.

Vikram Vedha is a fantastic movie, however it is not without issues. When split into two parts, the movie seemed unbalanced. Two chapters—one from Saif’s perspective and the other from Hrithik’s—make up the first half of the movie. There is too much going on in the second half. In addition to revealing Vedha’s past and his relationship to Vikram, the movie also includes two side stories that are essential to the movie’s resolution. The second half becomes hefty as a result of this. Some people could find this annoying, especially those who can no longer stand watching extended movies.

The Awadhi accent of Hrithik is another problem. It gets challenging to overlook his uneven accent. The green-eyed actress also struggles with delivering important speech, which results in some sequences having less of an impact than anticipated. Saif, on the other hand, excels in each scenario that is given to him. Saif provides a new side to him in Sacred Games, deviating from his cop character, and it is entertaining to see him interact with Hrithik.

In spite of its weaknesses, Vikram Vedha is a mass-produced movie that makes for a good single-screen theatre experience. I’d advise giving in to Pushkar and Gayathri’s fantasy world and joining Vikram and Vedha in their game of cat and mouse.

Quick review of the film Ponniyin Selvan: Vikram, Aishwarya Rai Bachchan, and Karthi all shine in this visual spectacle.