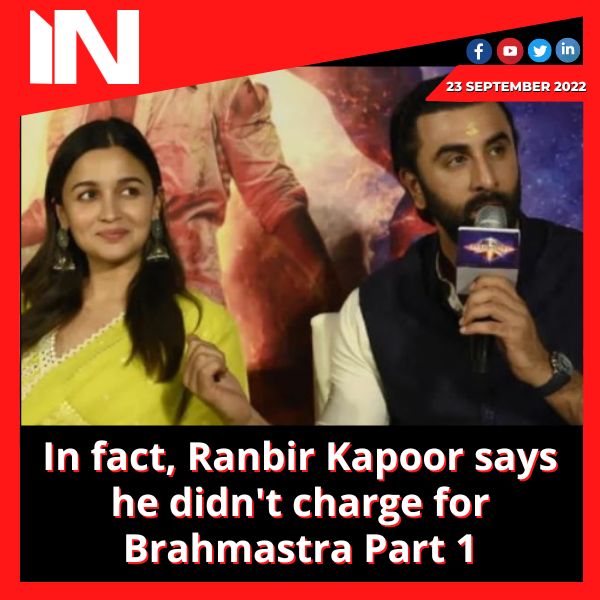 Brahmastra, directed by Ayan Mukerji, has been hailed as a box office success, although its actual box office performance and financial success are still unknown. Due to the film’s astronomical budget, many have branded it a blockbuster, but others are still not persuaded.
There is rumour that the movie’s actual budget, which has been circulating since the movie was still in production, is 650 crores, not 400 crores, as has been widely reported. Additionally, there is speculation as to whether the principal actors Ranbir Kapoor and Alia Bhatt had to forgo their pay due to the rising costs for VFX. Ayan has now addressed the same.

Ayan gave a hazy explanation when discussing the same with trade expert Komal Nahta. The question was directed at Ranbir Kapoor, but Ayan opted to respond, saying, “The fact is that the picture has been done due of a lot of personal sacrifice. It is true that Ranbir did not receive any of the money he would have received as a famous actor for the production of Brahmastra. This is a huge deal because without it, this movie couldn’t be made.

Ayan also discussed Alia, saying, “When she joined the movie, which was in 2014, she had only a few releases. She wasn’t always the celebrity she is now. Even though the payment for Alia in this movie was very minimal, by the time it was all said and done, Alia acknowledged that every penny had gone into its creation.

Ranbir, however, responded more succinctly. “Actually, maine kiya, aapne jo prashna pucha ki maine kuch charge kiya ya nhi kiya” (You asked if I charged anything or not, actually I did). I am a lifetime owner of this equity and a co-producer of the movie. My nazariya and I will go far together (I am thinking more long term). Maine part one me paese nhi liye (I didn’t charge for part 1), but in the end, “jo faith aur belief hai ki 3 parts m jo yeh film bana sakti hai” (but the faith I have about the amount that the film would make across three parts) is beyond whatever I’d get as an actor, pricing as an actor.

Ranbir previously clarified that the budget for Brahmastra Part 1-Shiva, which was reported to be 650 crore, is really divided among the franchise’s three films. Ranbir stated, “These days, we read a lot of articles where people are questioning the budget of the film. People often quote the budget as being this amount and the recovery as being that much. However, Brahmastra stands out since it has a budget for a trilogy rather than simply one movie.

Despite to Mani Ratnam’s request that they not become friends, Aishwarya Rai took a selfie with Trisha Krishnan on the Ponniyin Selvan 1 sets