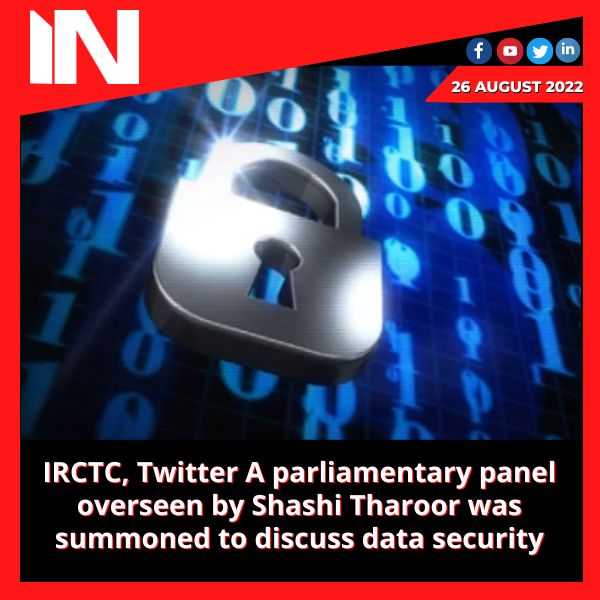 On Friday, the Parliamentary Standing Committee on Information Technology, chaired by Congress MP Shashi Tharoor, has invited Twitter and the Indian Railway Catering and Tourism Corporation (IRCTC) to testify. Concerns over “citizens’ data security and privacy” have prompted the summoning of the microblogging platform and the railway ticketing service. The Personal Data Protection (PDP) Bill, 2019, was withdrawn by the centre just days prior to the legislative hearing. A new bill will now take its place.

Twitter’s administration and membership would be questioned by the Tharoor-led parliamentary inquiry, according to sources who have been contacted by PTI. It is also possible to inquire about the social media site’s favouritism of a specific political party.

The IRCTC, which has over 10 crore subscribers, has recruited a consultant to monetize passenger data in the meantime. The panel can question why a consultant was hired. The sources stated that IRCTC could also be questioned over the tender that was floated to employ the expert.

The sources claim that the Tharoor-led panel has been talking with different stakeholders on data security and privacy. These include social media businesses, internet companies, government agencies, and other regulators. The panel’s report will probably be completed before August 30.

The Personal Data Protection (PDP) Bill, 2019, was withdrawn earlier this month by the federal government, which is headed by Information and Technology Minister Ashwini Vaishnaw. This statute will now be repealed in favour of a “comprehensive measure” for “modern digital privacy regulations.”

On September 1, Sony may unveil its newest smartphone, the Sony Xperia 5 IV