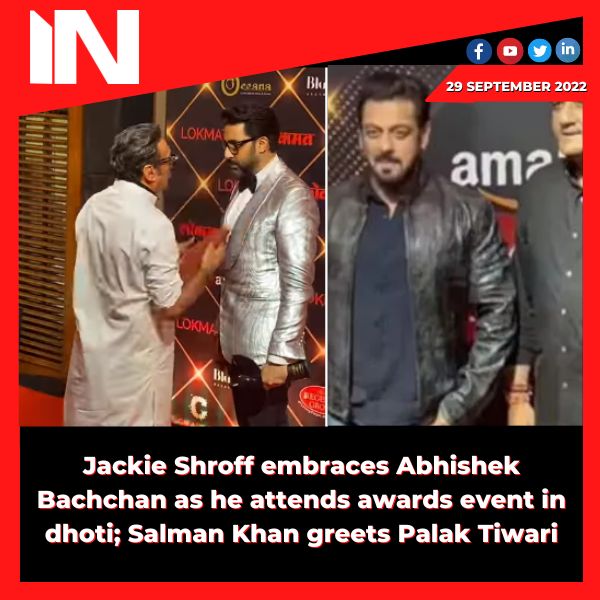 Numerous Bollywood stars were seen arriving at the Lokmat Most Stylish Awards 2022, which were held in Mumbai on Wednesday night, dressed to the nines. The event was attended by Jackie Shroff, Salman Khan, Abhishek Bachchan, Rashmika Mandanna, Raveena Tandon, and Vidya Balan.

A paparazzi posted a video of Abhishek entering the event and going to hug Jackie Shroff on Instagram. As Jackie gave him a handshake and patted his cheeks, they also conversed. Jackie dressed for the occasion in a white kurta and matched dhoti. Abhishek chose an outfit consisting of a white shirt, a silver coat, black pants, and matching shoes.

Salman Khan showed up to the event in a black jacket, denims, and a navy blue shirt. He grinned as he posed for photos beside many other individuals. Salman was spotted embracing and congratulating Palak Tiwari. She chose an outfit in black and white.

Rashmika and Tamannaah both chose colourful outfits for the occasion, while Tamannaah wore a beige saree and matching sleeveless blouse. In addition, Vidya wore a purple saree and blouse.

Riteish chose a black turtleneck T-shirt underneath a grey jacket and matching leggings, while Genelia donned a beige ensemble. Raveena chose a crimson and white ensemble. Tejasswi wore a beige saree and a golden blouse, while Karan chose a black ethnic dress.

Jackie recently appeared in the comedy Atithi Bhooto Bhava alongside Sharmin Sehgal and Pratik Gandhi. He will next be seen with Katrina Kaif, Siddhant Chaturvedi, and Ishaan Khattar in the horror-comedy Phone Bhoot. The movie, directed by Gurmmeet Singh, is scheduled to open in theatres on November 4.

The last time viewers saw Abhishek Bachchan was in the Netflix film Dasvi with Yami Gautam and Nimrat Kaur. Together with Saiyami Kher, he will be seen in Ghoomer. R Balki is in charge of Ghoomer. Salman will next be seen with Pooja Hegde in the action comedy Kisi Ka Bhai Kisi Ki Jaan. In addition, he will star in Tiger 3 with Katrina Kaif, which is scheduled to open in theatres on April 21, 2023.

‘Sita’ Dipika Chikhlia on Adipurush teaser: ‘If the character is from Sri Lanka, they should not look like Mughals’