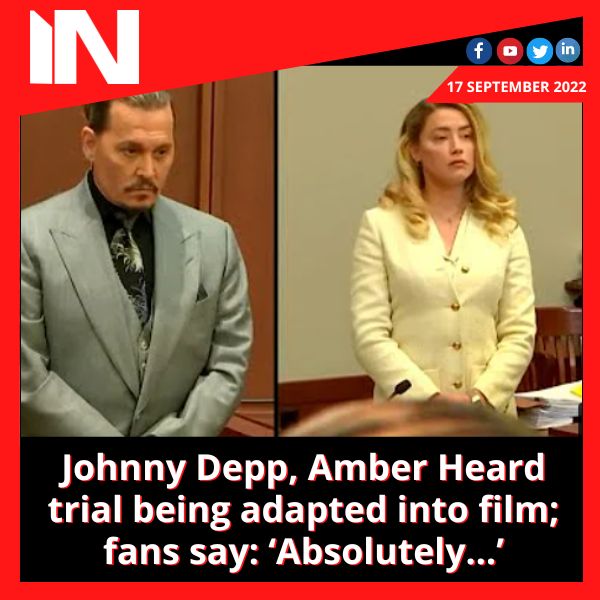 Hot Take: The Depp/Heard, a movie about the current defamation case, is being hurriedly released on the streaming service Tubi, according to a recent report. This comes days after the trailer for the upcoming documentary of the Johnny Depp and Amber Heard trial, Johnny vs Amber: The US Trial, was released. Johnny sued his ex-wife for defamation in the June trial over an op-ed she published in The Washington Post in 2018.

Amber had mentioned that she had experienced domestic abuse in her essay. Despite the fact that Johnny was not specifically mentioned in the piece, his attorneys said that it implied he was abusive toward her while they were dating, something he fiercely denies. According to a recent source, the upcoming movie Hot Take: The Case Against Depp/Heard, will star Mark Hapka as Johnny Depp and Megan Davis as Amber Heard, and is directed by Sara Lohman.


Variety reports that Hot Take: The Depp/Heard Trial would dramatise the events surrounding the defamation case between Johnny and Amber that took place earlier this year and lasted for more than six weeks in a US court. According to the source, the movie will focus on the former couple’s “tumultuous relationship.” The chief content officer of Tubi, Adam Lewinson, was quoted in the Variety article as saying that the movie is expected to “capture a timely take on a story that became part of the cultural zeitgeist, painting a unique picture of what millions watched play out in the headlines over the summer” despite the fact that not much else about the movie has been made public.

When it was announced that Hot Take: The Depp/Heard Trial will be released soon, many people responded on social media, with some voicing their disgust. Even a petition to prohibit the movie’s release was created by a fan. “Sign this Petition to ask @Tubi to withdraw this film,” read the message. Amber’s suffering is over. It takes one minute to conceal your signature. I do not want to see Hot Take: The Depp/Heard Trial on Tubi or anywhere else, another person tweeted.

Hot Take: Fox Corporation-owned streaming service Tubi will premiere The Depp/Heard Trial on September 30. In the regions where it is available, including the US, Australia, and New Zealand, the movie will purportedly be shown for free.

After dating for over three years, Johnny and Amber got married in 2015 in their Los Angeles home. Amber divorced Johnny in May 2016 and obtained a temporary restraining order against him. She said that during their relationship, Johnny had physically abused her, most frequently when under the influence of alcohol or drugs.