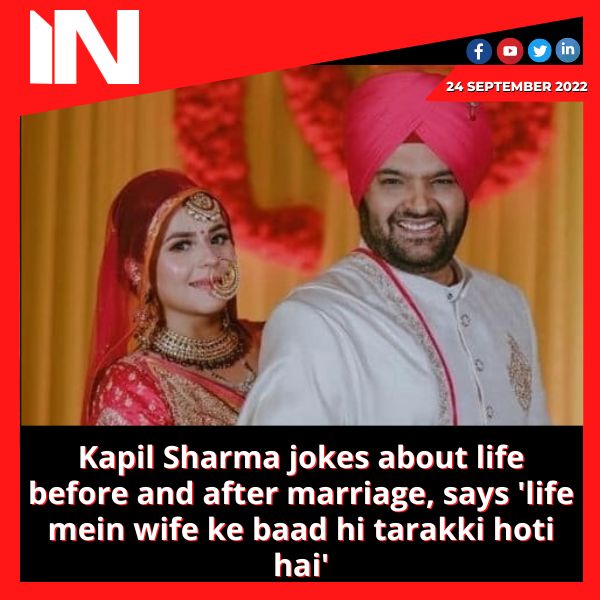 The third season of The Kapil Sharma Show, Kapil Sharma’s comedy programme, has returned. In one of the new show previews, the actor-comedian is seen discussing how a man’s life changes after marriage. Life mein aapki jab wife aati hai uske baad hi tarakki hoti hai (success is gained only after the admission of a wife into your life),” a leaner-looking Kapil is heard saying in a new footage that Sony TV shared on Friday.

Kapil continues by discussing how bachelors hang clothing on chairs till they resemble bean bags. When they go home after drinking, they allegedly discover the chair is missing (after it gets hidden under the heap of clothes). ” He continues by drawing comparisons between bachelors who ride bikes like Rajesh Khanna before getting married and those who sit with a straight face after getting married for six years and having three children. He makes a joke about a child’s shorts catching fire while being washed while they are sitting on a bike’s fuel tank.

In December 2018, Kapil and his longtime girlfriend Ginni Chatrath were married. One year old Trishaan and two-year-old Anayra are the couple’s children. A few months ago, Kapil took a sabbatical from The Kapil Sharma Show to focus on his next movie. In the upcoming movie Zwigato, he plays a companion who helps deliver food. The Nandita Das-directed movie will now be shown at the Busan International Film Festival next month after recently making its world premiere at the Toronto International Film Festival.

Kapil portrays an ex-floor manager of a factory who loses his job due to the pandemic, according to ANI. He then struggles with the world of ratings and rewards while working as a food delivery rider. His stay-at-home wife starts looking into other employment options in order to supplement the family’s income, both nervously and eagerly anticipating her newfound independence. The movie is about how life is unrelenting, but there are also shared joyful times. It depicts the lives of inconspicuous, unseen “ordinary” individuals.