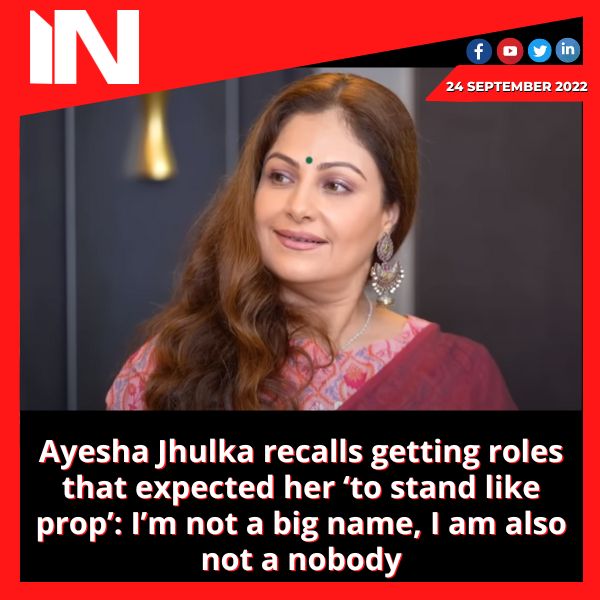 According to Ayesha Jhulka, the types of jobs that were being offered to her caused her to take an extended break from acting in movies and television shows. She claimed that most of them required her to “stand like a prop” or were repetitions of things she had already done. With Tanuja Chandra’s Prime Video series Hush Hush, Ayesha has made a comeback. She previously appeared in the 2018 movie Genius.

Ayesha talked about how long it took her to return to the big screen in an interview with Indian Express “Either I was getting the roles I had already played or I was getting large films with big directors and big producers and a big star cast where I had no part. It was incredibly challenging to refuse since everyone around me would get excited and assume that it was a huge production, etc. It is okay, do it; what now are you hoping for a Filmfare award or what?, others said in an attempt to persuade me. I would agree after hearing all of this, but the following morning I would disagree because I was still not convinced.”

She added, “Because you had an Ayesha Jhulka in your production, I wouldn’t be expected to do anything special in those positions; nevertheless, I wouldn’t be expected to stand there like a nobody either. I didn’t want to be included in a project merely because of my name or anything associated with it. I didn’t want to be utilised. It gives you the creeps. People didn’t mind if I declined jobs, but I would struggle if I agreed to take on roles that I felt weren’t appropriate. Even when it came to things I didn’t want to do, I felt as though I had to constantly prove myself.”

Ayesha had previously stated to PTI that she was “extremely sorry” because ten years ago, “they didn’t know what to do with me or someone in their 40s because we have seen women as heroines or the mother of the hero.”