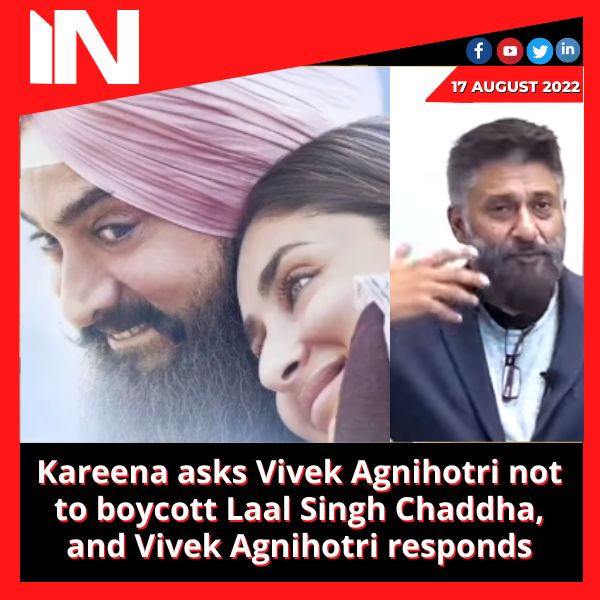 Vivek Agnihotri, the director of The Kashmir Files, appears to have poked fun at Kareena Kapoor and Laal Singh Chaddha after the actress asked fans not to boycott the movie out of respect for the 250 or so people who worked on it. Vivek responded to Kareena’s statement in a similar manner on Twitter.

Kareena along with Aamir Khan play the title characters in Laal Singh Chadha. The movie is an official Hindi remake of the Tom Hanks-starring Forrest Gump from 1994. Prior to its release, the hashtag “Boycott Laal Singh Chaddha” became popular on Twitter, which brought attention to Laal Singh Chaddha. Many demanded a boycott of the movie because they believed Aamir had offended religious sensibilities in his previous film, PK.

Laal Singh Chaddha is such a beautiful movie that people shouldn’t boycott it, Kareena had recently said. And I want Aamir Khan and I to appear together on screen. We’ve waited so long—three years, to be exact. So, please refrain from boycotting this movie because doing so is equivalent to boycotting quality cinema. And 250 people worked on the movie for two and a half years, putting in a tonne of effort. In an interview with Siddharth Kannan, she made the demand.

Vivek Agnihotri pointed out on Twitter that after some people boycotted his movie, The Kashmir Files, few people in the film industry supported it “When good content small films are sabotaged, boycotted by the dons of Bollywood, when multiplexes remove their shows, when critics band together against small films, when these things happen… Nobody considers the 250 underprivileged individuals who toiled long hours on that movie.”

He also added, “Why do the kings of Bollywood continue to boycott, ban, and ruin the careers of so many outside actors, directors, and writers? When the average Indian learns about the haughtiness, fascism, and anti-Hindu sentiment of the Bollywood dons, they will drown them in hot coffee.”

Additionally, he responded to a tweet about theatre attendance for Laal Singh Chaddha performances. Vivek replied to one of these tweets by asking, “Who has single-handedly led Bollywood to such mess and humiliation? Fun fact: In Bollywood, his/it/their/kingdom them’s is still expanding while obliterating everyone else. Let’s smell the coffee. Anyone interested in producing an objective, critical, and academic podcast on this topic?

With a 340 crore global gross, Vivek’s The Kashmir Files is still the highest-grossing movie of the year. The killings of Hindus in Jammu and Kashmir served as its focal point. Laal Singh Chaddha had an initial gross of 11.70 crore and currently has a five-day total of between 45 and 46 crore.

When asked about watching The Kashmir Files after it had been released, Aamir Khan responded that every Indian should. During a Hindi-language event, he had stated, “I will definitely watch the film. It is a heartbreaking chapter in our history. It’s really tragic what happened to the Kashmiri Pandits. Every Indian should watch the movie made about this topic and think back on what it’s like to experience such trauma.

In response to the boycott Laal Singh Chaddha trend, Ekta Kapoor refers to Aamir Khan as a legend

Kareena Kapoor posts a photo of a “gang of lads” with Saif Ali Khan, Ibrahim, Taimur, and Jeh