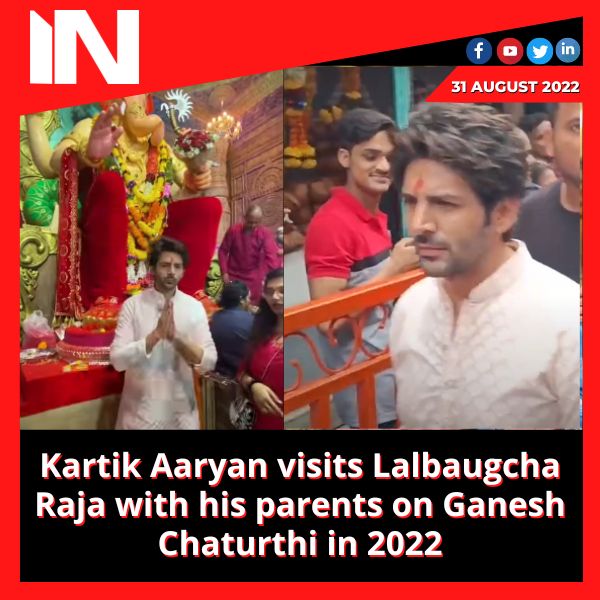 On the occasion of Ganesh Chaturthi, Kartik Aaryan traveled with his parents, Manish and Mala Tiwari, to Mumbai’s renowned Lalbaugcha Raja. On Wednesday, a paparazzi account posted a video to Instagram showing the actor bowing and touching the idol’s feet with his head as he requested Lord Ganesha’s blessings. He also offered a coconut and then folded his hands in prayer.

Kartik also struck a pose in front of the Ganesha statue for the fans. The actor was also spotted performing the prayer at Lalbaugcha Raja as instructed by his mum. Kartik dressed for the event in a baby pink kurta and white pajamas. Kartik posed for pictures with admirers, including kids, after leaving the arena. He also extended his hands in greeting to the crowd.

Kartik Aaryan also shared a clip of himself driving over Mumbai’s Bandra-Worli Sea Link on his Instagram Stories. He also shared a selfie in which he turned his back on the lens. He changed the background of his photo to include joyful music.

The last time fans saw Kartik was in Kiara Advani and Tabu’s Bhool Bhulaiyaa 2, directed by Anees Bazmee. The movie made more than 200 crore at the box office globally. He will next be seen in the February 10, 2023 release of Shehzada, which also stars Kriti Sanon. The movie, directed by Rohit Dhawan, is an official translation into Hindi of the Telugu film Ala Vaikunthapurramuloo.

Along with Kiara Advani, Kartik also stars in Sajid Nadiadwala’s Satya Prem Ki Katha. The movie is slated to hit theaters on June 29, 2023. Additionally, Kartik will appear in Freddy alongside Alaya F. The movie, which Ekta Kapoor produced, is billed as a romantic thriller. He also has Captain India by Hansal Mehta in his collection. The movie, which is produced by Ronnie Screwvala and Harman Baweja, centers on one of India’s most accomplished rescue operations from a war-torn nation.

Ankit Raj: I’m quitting TV to focus on movies and a web series