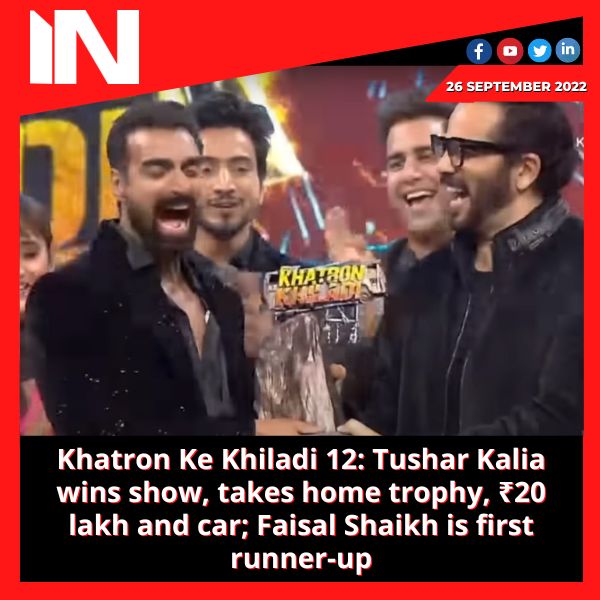 Ranveer Singh and Pooja Hegde, who will co-star in Rohit’s upcoming movie Cirkus, were guests on the show. Johnny Lever, Sanjay Mishra, and Varun Sharma were also welcomed by Rohit to the show. Varun read a letter written by contestant Rajiv Adatia to Ranveer during the show. Ranveer, Pooja, Rohit, and the other competitors were in stitches after reading the humorous letter. Rohit requested that Ranveer and contestant Rubina Dilaik style one another on the show.

The grand finale was shown on ColorsTV on Sunday. Mohit Malik, Faisal, and Tushar completed the last task. Faisal declared before starting the challenge that he would dedicate it to his social media fans if he won. The stunt was a tribute to Mohit’s son Ekbir.

On its Instagram page, ColorsTV posted images of Tusshar’s victory from the grand finale with the statement, “Tushar has successfully won the trophy, as the winner of #KhatronKeKhiladi #KKK12 #KKKGrandFinale @itsrohitshetty @thetusharkalia.” Tushar responded to the tweet by using a red heart emoji. Fans congratulated him as well. “Most Deserving, congratulations @thetusharkalia,” someone wrote.

He debuted in Bollywood as a choreographer for the movie Ae Dil Hai Mushkil, directed by Karan Johar. The Zoya Factor, Junglee, Ok Jaanu, Dhadak, War, Half Girlfriend, and Hate Story 4 were among the movies that Tushar choreographed.

Alia Bhatt thanks ‘dearest’ Shilpa Shetty for treating her to pizza, shares pic