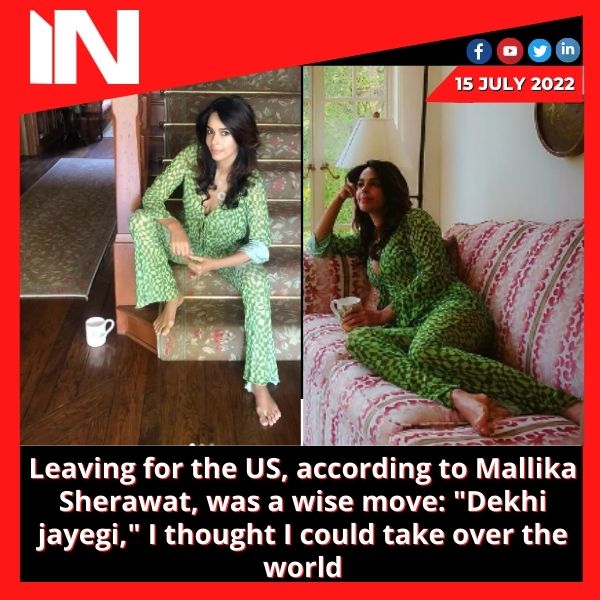 Mallika Sherawat has spoken candidly about her choice to leave Bollywood after becoming well-known and move to the US in order to “explore different vistas.” With the 2004 film Murder, the actor established herself in the Hindi film industry. She afterwards appeared in a number of other movies. With the release of RK/RKay, a new film by Rajat Kapoor, she has returned to Hindi cinema.

“I had this idea that I could rule the world” (will see). coming from the Jat (a Hindu caste) mentality and from Haryana. I disobeyed, packed my bag, and left for Bombay. It fortunately worked out for me. When I moved to the US, I had the same mindset, she said, according to ETimes.

According to Mallika, her choice was “fruitful” because she had two meetings with Barack Obama, who was the US President at the time, collaborated on a music video with Bruno Mars, and appeared in the indie film Politics of Love. “I felt the time was perfect to explore other perspectives and various cultures after working in Bollywood for 5-7 years. In that circumstance, I thought to myself, why not. I have nothing to lose. I’ve established enough of a reputation in India. I have money. I’m well known. Let’s attempt to travel to a new nation. And boy, was it a wise choice! Due to the affection that America has shown her, she said.

In RK/RKay, a comedy directed by Rajat Kapoor, Mallika portrays a 1960s actor. Along with actors Ranvir Shorey and Kubbra Sait, Rajat also appears in the movie, which opened in theatres on Friday. In 2019, Ekta Kapoor’s horror-comedy online series Booo Sabki Phategi served as Mallika’s final effort in India. Along with Tusshar Kapoor, Krushna Abhishek, Sanjay Mishra, Kiku Sharda, and Shefali Zariwala, she played a ghost in the production.

Advertisement
Related Topics:dekhijayegileavingmallaikasherawatmovetakeUSworld
Up Next