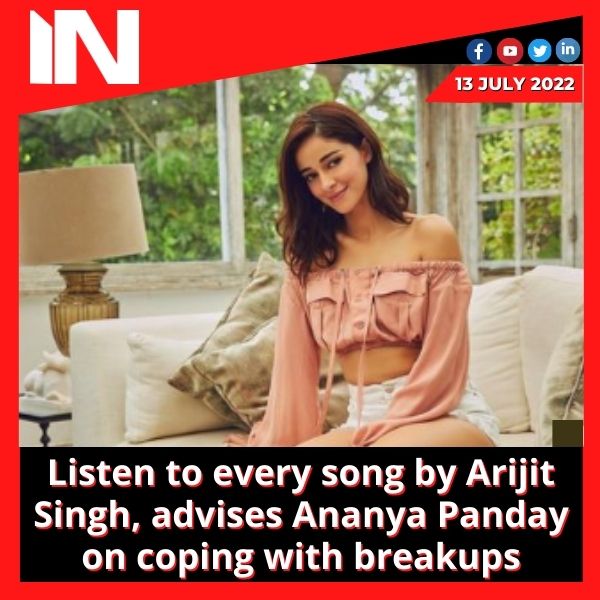 Ananya Panday has spoken candidly about her approach to ending relationships. She advised against repressing feelings and instead letting them out completely.

Ananya Panday has discussed the method she uses to deal with breakups. Before supposedly splitting up this year, the actor was once said to have been dating her Khaali Peeli co-star Ishaan Khatter. In the Liger movie, which was made by Karan Johar, Ananya will now appear opposite Vijay Deverakonda.

Like the majority, Ananya swears by Arijit Singh songs whenever she is depressed. She also suggested eating a lot of ice cream to get over a breakup.

Ananya spoke to ETimes about the same and stated, “I consider myself to be the type of person who thinks it is important to express all of one’s feelings. We believe we are being strong if we suppress our emotions. We promise ourselves, “No, I won’t cry,” but eventually, holding back your emotions catches up with you. I believe it’s acceptable to sob uncontrollably when listening to all of Arijit Singh’s songs. You can have as much ice cream as you want and one day everything will be OK. Additionally, I don’t believe there is any greater treatment than hanging out with your closest pals.”

Ananya was last spotted in Gehraiyaan by Shakun Batra, where she was depicted grieving over her boyfriend’s affair with her own cousin. Siddhant Chaturvedi played her boyfriend in the movie, and Deepika Padukone played her cousin.

Ananya is currently getting ready to promote her forthcoming movie, Liger. On August 26, Liger, a film directed by Puri Jagannadh and dubbed in Hindi, Tamil, Telugu, Kannada, and Malayalam, will open in theatres. Ananya was seen dancing in the movie’s first song, Akdi Pakdi, which was made public on Monday.

Alongside Siddhant Chaturvedi and Adarsh Gourav, Ananya will also appear in Kho Gaye Hum Kahan. The movie should be released the following year.

Advertisement
Related Topics:AnanyaPandayarijitbollywoodbreakupsEntertainmentIhtIndiarelationship
Up Next

In the film Thank You, Naga Chaitanya says he is a fan of Mahesh Babu