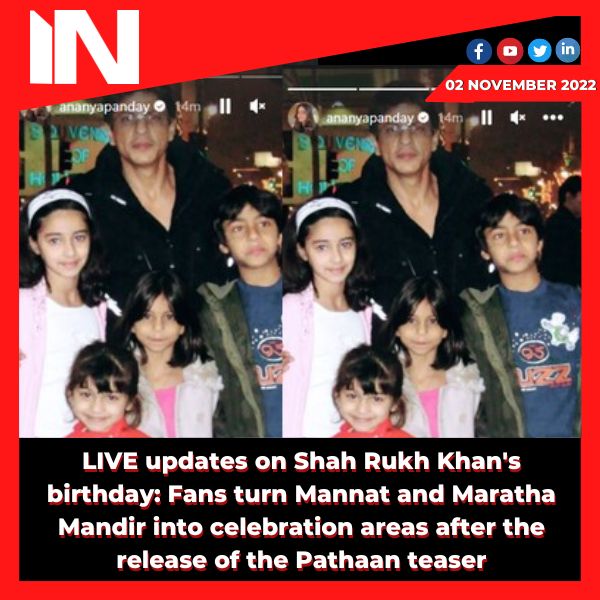 LIVE updates on Shah Rukh Khan’s birthday: Officially, today is SRK Day! Today, November 2, marks Shah Rukh Khan’s 57th birthday, and congratulations are flooding in for the Pathaan actor from all around the world. To wish her famous father a happy birthday, daughter Suhana tweeted a snapshot of them as kids. In a lengthy article, Karan Johar detailed his first encounter with SRK. His return movie Pathaan features a teaser that is packed with action and exciting scenes.

With a few close friends, his family, and a throng of followers, Shah Rukh Khan celebrated his birthday. Outside of Shah Rukh Khan’s Mannat residence in Mumbai, a sea of admirers gathered to wish the superstar. Shah Rukh responded by rising to his iconic balcony with his son AbRam, opening his arms wide and expressing his love to his admirers.

The past two years, supporters have avoided swarming outside Mannat due to the Covid-19 pandemic. Fans made up for it this year by congregating outside his house with various forms of artwork, banners, and posters while screaming his name. While the festivities have started off well, a number of celebrities have already started greeting Shah Rukh on social media.

Today is Bollywood’s King Khan’s 57th birthday. The teaser for the upcoming movie Pathaan was released on this occasion. SRK’s return movie’s teaser has received overwhelmingly positive reviews. John Abraham and Deepika Padukone both appear in the movie. The teaser’s co-star John Abraham said, “This one is for you,” before dedicating it to SRK.

Along with Pathaan, fans had hoped that Jawan and Dunki would also debut their first posters, teasers, or perhaps trailers on this memorable day. An image of Shah Rukh Khan and Deepika Padukone from the Pathaan set that appeared online before Shah Rukh’s birthday heightened interest in the movie. Shah Rukh will make a lead comeback in Pathaan. after a lengthy four years.

Priyanka Chopra’s most recent post from Mumbai makes Dia Mirza nostalgic for their time as Miss India. See this

On his Instagram account, Snoop Dogg posted a popular video of a young child dancing to Pushpa’s Saami Saami.