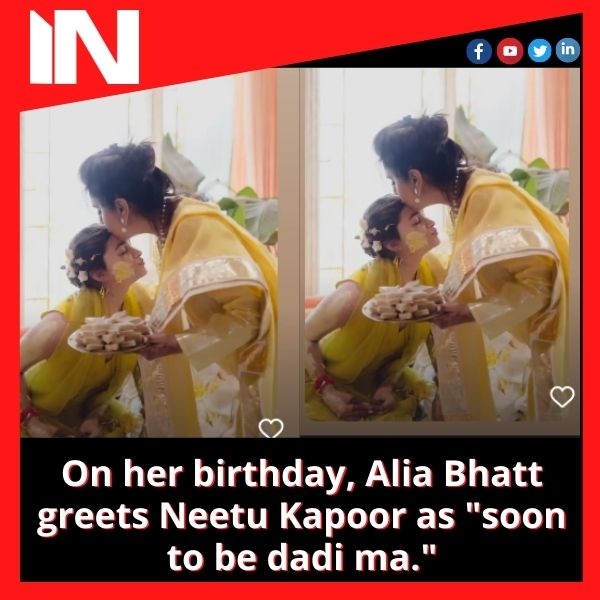 Alia Bhatt wishes Neetu Kapoor on her birthday and shares an unreleased snapshot of the two of them. When Neetu Kapoor turned 64, Alia Bhatt wished the seasoned performer with a photo. The first kid Alia and Ranbir Kapoor will have together is due soon. In Mumbai, the pair got hitched in April.

With a lovely Instagram post, Alia Bhatt wished Neetu Kapoor a happy birthday. The star shared a candid photo of the two from the Kapoor wedding festivities in April on Friday via her Instagram Stories. Alia’s Haldi (pre-wedding) ceremony is depicted in the unpublished photo. In the picture, Neetu can be seen kissing the prospective wife on the forehead. Along with their photo, Alia also posted a message for the “soon to be dadi ma.” On July 8, Neetu will turn 64.

Neetu was recently seen at the Mumbai airport before departing for London to be with her family. Neetu was captured on camera addressing the media as she made her way to the exit gate in a paparazzo account video. Neetu was questioned by a photographer, “Mam kaha ja rahein hai (Where are you going)? London? She nodded in agreement. Neetu responded, “Nahin meri beti waha hain,” when asked whether she planned to meet her daughter-in-law Alia in London (No, my daughter Riddhima Sahni is there). In the video, Neetu can be heard saying, “Bahu, I suppose shoot ke liye kahi gayi hai (I think Alia has gone somewhere for a shoot)”.

On April 14, Alia and Ranbir Kapoor exchanged vows in a private ceremony in Mumbai with just their closest relatives and friends present. Using an ultrasound image and a photo of her husband Ranbir’s head, Alia announced her pregnancy on Instagram in June.

Ranbir has been actively promoting his soon-to-be released movie Shamshera while Alia is in London filming her highly anticipated Hollywood debut Heart of Stone, which also stars Gal Gadot and Jamie Dornan. Shamshera will hit theatres on July 22. Brahmastra Part One: Shiva, Alia and Ranbir’s first collaboration, will be released later in September. The fantasy-adventure drama, which also features Amitabh Bachchan, Mouni Roy, and Nagarjuna, is written and directed by Ayan Mukerji.