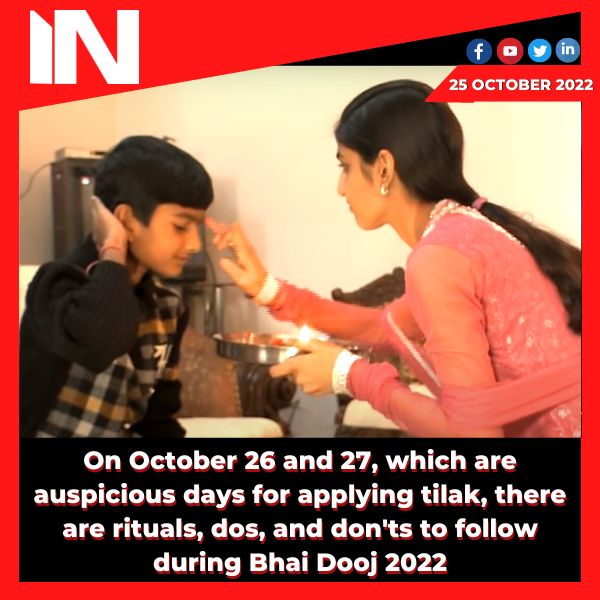 Bhai Dooj 2022: Every year, on the second day of Shukla Paksha in the month of Kartik, Bhai Dooj is observed. Typically, this holiday is observed two days after the festival of lights known as Diwali and a day after Govardhan Puja. The celebration honours the holy and loving relationship between brothers and sisters. Sisters put tilak on their brothers’ foreheads, pray for their brothers’ long and healthy lives, and make delectable meals for them on this day. Sisters invite brothers to their houses on Bhai Dooj and treat them to their favourite foods, while brothers shower them with presents and swear to look out for them. Bhaiya Dooj, Bhau Beej, Bhatra Dwitiya, Bhai Dwitiya, and Bhathru Dwithiya are additional names for the festival.

Bhai Dooj is also known as Yama Dwitiya, and according to a legend, Yamraj’s sister Yamuna finally succeeded in inviting her brother to her home after several failed attempts. Yamraj was shocked to see that his sister had planned a lavish ceremony, a feast, and presented him sweets. She also applied a tikka to his forehead to greet him. After beating Narakasura, Lord Krishna visited his sister Subhadra, according to a different narrative. According to legend, Subhadra gave Krishna a flower garland as a welcome, put a tikka on his forehead, and led an aarti for him. These two myths are connected to the beginning of Bhai Dooj.

Women bathe on this day before Surya Dev is presented with arghya. After that, roli, akshat, kumkum, sweets, supari, gola (dry coconut), and other ingredients are used to prepare the thaal for Bhai Duj. In order to pray for their brothers’ long lives, sisters must apply tilak to their brothers’ foreheads, give them mithai, and give them a gola (dry coconut). After the tikka ritual, sisters and brothers gather for a feast that the former has carefully cooked.

Procedures, Dos and Don’ts for Tilak

Wishes for Govardhan Puja in 2022, including images and WhatsApp messages

This adorable photo of Malaika Arora and Arjun Kapoor from her birthday is priceless! – Look inside