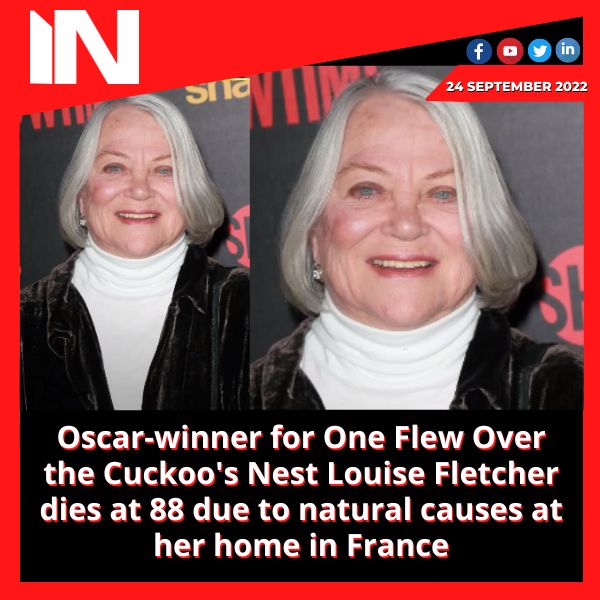 At the age of 88, Louise Fletcher passed away. The Oscar-winning actress passed away at her home in Montdurausse, France, of natural causes, her family announced in a report. She is best recognised for her role as Nurse Ratched in the 1975 Jack Nicholson and Milos Forman film One Flew Over the Cuckoo’s Nest. She had already won the 1976 Academy Award for best actress in a leading role for it.

Over the course of her acting career, Louise appeared in various television shows and motion pictures. In Star Trek: Deep Space Nine, she played the Bajoran cleric Kai Winn Adami in a recurrent role. She was also well-known for her parts in Joan of Arcadia and Picket Fences. According to a source, Louise passed away in her sleep in the house she converted from a 300-year-old farmhouse while surrounded by her family.

Deadline announced Louise’s passing. Her family did not give a reason for her passing, but according to her agent David Shaul, on September 23 she told them about her cherished home: “I can’t believe I constructed something so essential to my well-being.”

Louise was born to deaf parents on July 22, 1934, in Birmingham, Alabama, in the United States. Louise started her acting career in the late 1950s with TV shows like 77 Sunset Strip, Lawman, Bat Masterson, Maverick, and The Untouchables.

Louise became became the third woman to get an Oscar, a BAFTA, and a Golden Globe for the same performance with her Oscar victory. She spoke in sign language during her acceptance speech for the Academy Award, according to Deadline, making it one of Oscar’s most enduring moments.

Jerry Bick, a movie producer, and Louise were wed from 1959 until their divorce in 1977. Her sons John and Andrew Bick, granddaughter Emilee Kaya Bick, sister Roberta Ray, brother-in-law Edward Ray, and ten nieces and nephews are all still alive, according to Deadline.