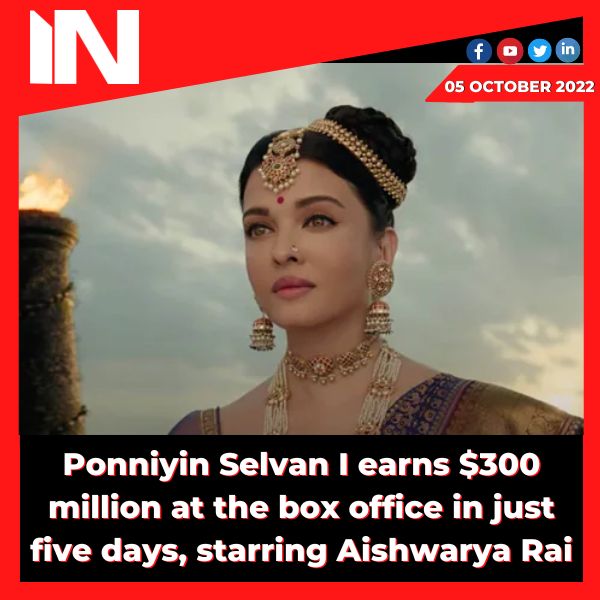 The critically acclaimed Ponniyin Selvan: I, directed by Mani Ratnam and based on the Kalki novel of the same name, is now dominating the box office. According to trade sources, the movie has made over $300 million worldwide, and it has surpassed the $100 million mark in Tamil Nadu. On September 30, the movie PS1, popularly known as PS1, was shown in theatres around the world in five different languages: Tamil, Hindi, Telugu, Malayalam, and Kannada.

Trade analyst Trinath verified that Ponniyin Selvan: I made more than 300 crore in worldwide box office revenue. The historical drama depicts the early years of Arulmozhivarman (Ponniyin Selvan), who subsequently rose to power as Rajaraja I, the first Chola emperor (947–1014). Ponniyin Selvan: I had crossed over 100 crore in Tamil Nadu, according to industry tracker Ramesh Bala, who also stated this in a tweet. However, Ponniyin Selvan: I’s global box office results still trail behind SS Rajamouli’s film RRR and KGF Chapter 2, which stars Yash. Both movies brought in much than 600 crores in net revenue.

“PS1 is performing remarkably well. Due to the (Durga) puja holidays, theatres are packed every night for the full week. The movie has made over 300 crore worldwide, and over 100 crore in Tamil Nadu. According to Trinath, this is shaping up to be Mani Ratnam’s biggest box office success.

Ponniyin Selvan: I, which was made on a sizable budget, had the best Tamil opening of 2022 with a total opening global haul of 80 crore. Jayam Ravi, Vikram, Karthi, Aishwarya Rai, Trisha, Sobhita Dhulipala, and Aishwarya Lekshmi are among the actors who appear in the movie. After a decade, the movie marked Aishwarya’s return to Tamil cinema. Both Nandini and her mute mother Mandakini Devi are played by Aishwarya. When the film was first released, both viewers and critics praised Aishwarya’s performance.

In a recent interview, Mani Ratnam expressed his gratitude for having been able to split the movie into two parts and release it now, when people were more prepared to watch a multi-part movie.

Madhuri Dixit purchases a lavish apartment in Mumbai with a sea view for $48 crore.