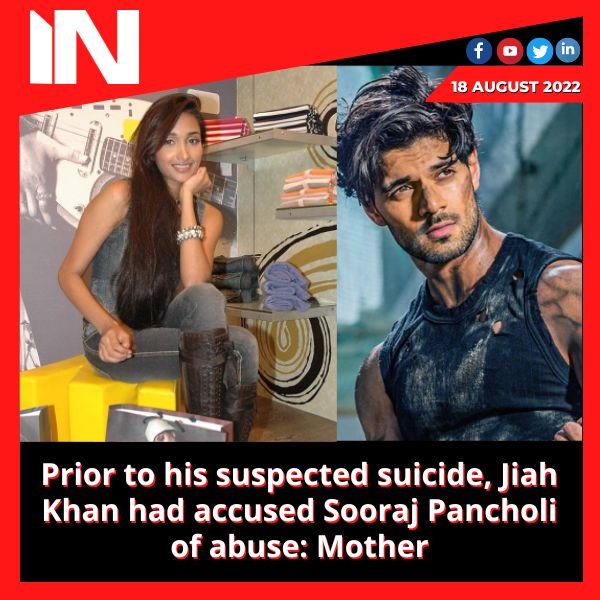 Jiah Khan’s mother, Rabia Khan, testified before a Mumbai special court on Wednesday that her daughter had accused her then-boyfriend, actor Sooraj Pancholi, of verbally and physically abusing her months before to her suspected suicide in June 2013. Rabia started videotaping her evidence in front of a special judge in the case against Sooraj, who was arrested by the Central Bureau of Investigation (CBI) for aiding in suicide after Jiah passed away. Currently, he is free on bond.

Jiah Khan’s debut into Bollywood, her career, and her relationship with Sooraj Pancholi, according to information provided to the court by Rabia. According to her, the actor contacted Jiah over social media and insisted on meeting her. Jiah was originally “apprehensive and reluctant,” according to Rabia, but eventually consented to meet him.

According to news source PTI, Rabia stated in court that the two initially met in September 2012. “At that time she sent some images… to me it looked like they clicked and had mutual interest… However, Jiah informed me they were only friends in September. She stated that Sooraj “took over” Jiah’s daily routine, and by October 2012, the two had moved in together.

When Rabia visited the couple in London in November 2012, she noted that Jiah appeared to be quite content. She claimed Jiah left for work in Mumbai after that and was meant to return to London for Christmas with her family, but she did not show up.

According to Rabia, Sooraj sent her a message on December 24, 2012. He claimed that after an argument with a buddy, he became upset with Jiah and that she (Jiah) ought to forgive him and give him another chance. Rabia testified in court, “At that moment, I noticed that the two had a serious fight.”

The two travelled to Goa after Jiah allegedly made the decision to give Sooraj another chance. Rabia noted that Jiah had mentioned in one of her phone calls that she was in an unfamiliar place and didn’t want to stay there. Rabia claimed, citing her chats with her daughter, that Sooraj allegedly used to shame Jiah in front of his friends by making out with other women while she was present.

On February 14, 2013, Rabia Khan claimed Jiah arrived unexpectedly in London and appeared dejected. Rabia claims Jiah informed her that Sooraj had verbally and physically attacked her and had also called her “filthy names.” On Thursday, Jiah’s mother will continue to give her testimony.

Jiah is best known for her Amitabh Bachchan-starring movie Nishabd. Her mother discovered her body at her Mumbai residence on June 3, 2013. Aditya Pancholi and Zarina Wahab’s actor son Sooraj is currently out on bail. The Mumbai Police, who conducted the initial investigation into the crime, seized a three-page note on June 10, 2013, which the CBI claimed was authored by Jiah and detailed her suffering.