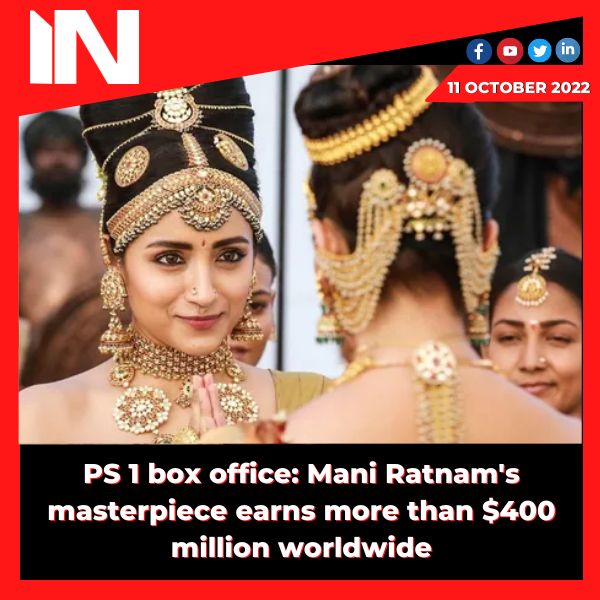 The big-budget epic movie Ponniyin Selvan 1 from Mani Ratnam is now having a dream run at the box office. It has broken the 400 crore club globally and, according to trade sources, will easily make another 120 crore to bring its lifetime gross to above 500 crore. Tamil, Hindi, Telugu, Malayalam, and Kannada versions of the movie were released in theatres all over the world.

Arulmozhivarman (Ponniyin Selvan), who would later become Chola Emperor Rajaraja I, is depicted in PS 1 as a young man (947–1014). Arulmozhivarman is played by Jayam Ravi in the movie, and other prominent characters include Vikram, Karthi, Trisha, and Aishwarya Rai.

On Tuesday, industry observer Ramesh Bala tweeted that PS 1 had earned 400 crore. The movie has surpassed Rajinikanth’s 2.0 to become the all-time biggest grossing Tamil movie in the US.

PS 1 is anticipated to continue its great run in theatres till Diwali, according to dependable trade sources. During the duration of its run over the following few weeks, it is anticipated to make an additional 120 crore rupees.

Over the weekend, PS 1’s gross in Tamil Nadu exceeded 150 crore rupees. It is currently the second-highest grossing movie in the state, trailing only Vikram, a movie starring Kamal Haasan that made almost 190 crore.

After a decade, the movie marked Aishwarya Rai Bachchan’s return to Tamil cinema. In addition to portraying Queen Nandini, Aishwarya also briefly appears as her deaf mother Mandakini Devi. At the time of its debut, Aishwarya’s performance greatly impressed both viewers and critics.

In a recent interview, Mani Ratnam stated that the sequel to the franchise will hit theatres in another six to nine months and that the crew is now working on post-production.

In a rare public appearance, Jacqueline dazzles in a saree at a Mumbai function.