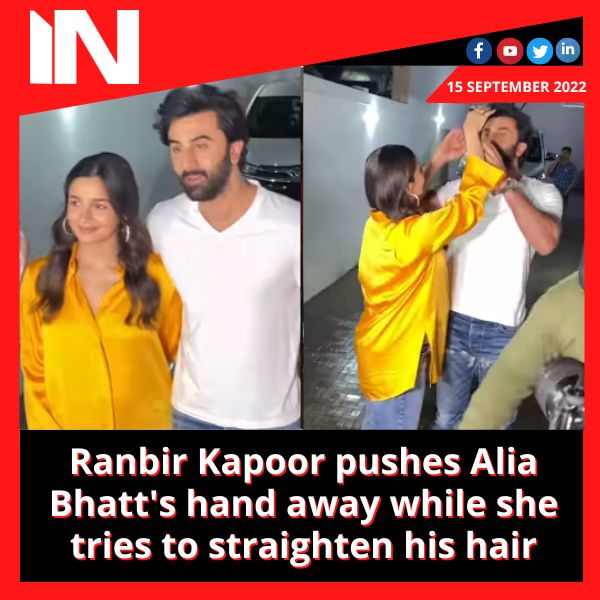 Ranbir Kapoor met Ayan at the Dharma Productions headquarters in Mumbai and gave him a hug in one of the videos. After that, he gave Alia a head kiss. She then removed something from Ranbir’s forehead’s side.

Next, Alia approached Ranbir to style his hair, but he resisted her touch and cocked his head to the side. Ranbir, who was standing next to her with his hair freshly styled, grinned. The group then grinned and posed for photos as a unit. Ranbir dressed for the visit in a white T-shirt, jeans, and white sneakers. Alia was spotted wearing heels, a flowy mustard blouse, and denims. Ayan chose a checkered shirt, pair of jeans, and footwear.

One viewer responded to one of the films by asking, “Why didn’t he let her touch his hair?!!! Ranbir acts in an odd way. “Boys seldom allow their girls to arrange their hair because they worry we will spoil it,” read another comment. Ranbir, like my boyfriend, gets upset when I touch his hair,” commented another person. An Instagram user also said, “They look so adorable together!” “Alia is such a nice person bless her,” said a fan.

On April 14, Alia and Ranbir exchanged vows in a private ceremony at his home in Mumbai. Before they got married, they dated for a very long time. The couple announced in June that they were expecting their first child, two months after getting married.

The duo appeared in their first joint film, Brahmastra Part One: Shiva, which was just released by Ayan. Amitabh Bachchan, Mouni Roy, and Nagarjuna all play major parts in the movie. On September 9, the film in the languages of Hindi, Tamil, Telugu, Kannada, and Malayalam debuted in theatres.

Alia has a number of upcoming projects, including Heart of Stone, which will mark her Hollywood debut. Gal Gadot and Jamie Dornan are also featured in the Netflix movie. Alia will also appear in Rocky aur Rani Ki Prem Kahani, Karan Johar’s upcoming film as director. Dharmendra, Jaya Bachchan, Shabana Azmi, and Ranveer Singh are also featured in the movie. In February of next year, it is expected to be released in theatres. She also has the Priyanka Chopra and Katrina Kaif-starrer Jee Le Zaraa from Farhan Akhtar.

Alongside Anil Kapoor and Bobby Deol, Ranbir will appear in filmmaker Sandeep Reddy Vanga’s gangster drama movie Animal. In addition, he will co-star with Shraddha Kapoor in the upcoming romantic comedy directed by Luv Ranjan, which is scheduled to open in theatres on March.