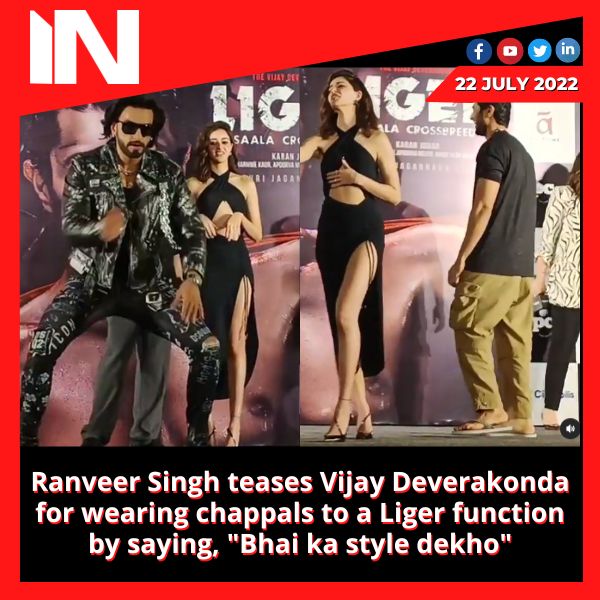 On Thursday morning in Hyderabad, Vijay Deverakonda launched the Liger trailer amid considerable enthusiasm. After a long day, he took a flight to Mumbai for a promotional event, where he decided to wear Hawaiian slippers. It was certainly noticed, too.

Vijay wore a black t-shirt with the word “The” in capital letters, beige cargo pants, and white chappals. Even Ranveer compared him to John Abraham, who has also been seen at functions wearing chappals. On the other side, Ranveer was dressed in a black t-shirt, printed black pants, a silver-grey jacket, and black boots.

In his conversation with Karan Johar at the event, Ranveer added, “Speaking of lust, the object of lust, sir, we have found out on your blockbuster talk show ki “the” ki kitni demand hai North India mein (the demand for Vijay in North India).” He was making a reference to the second episode of Karan Johar’s film, in which Sara Ali Khan declared her wish to date Vijay Deverakonda.

Ananya Panday, Vijay’s co-star, and Puri Jagannath, the director of Liger, were also in attendance. Vijay plays an underdog fighter from Mumbai in the MMA championship film Liger. On August 25, the sports drama will be theatrically released in Hindi, Telugu, Tamil, Kannada, and Malayalam.

At the occasion, Vijay added, “I’m looking forward to the day when it’s simply Indian cinema, and we’re called Indian actors. That is the reality we ought to aim for.

Advertisement
Related Topics:bhaikastyledekhochappalFeaturedfunctionligerRanveersinghteaservijaydeverakondaWearing
Up Next

After the baby is born, Ranbir Kapoor says, “I’ll sit down with them and have a talk.”