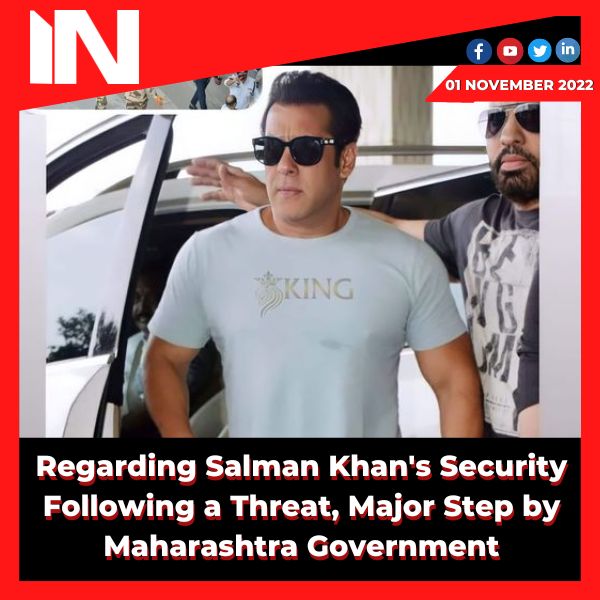 Mumbai: As a result of recent threats against him, which were purportedly made by the Lawrence Bishnoi gang, the Maharashtra government has decided that Mumbai Police will henceforth provide superstar Salman Khan with Y+ grade security cover, an upgrading of two levels. The 12 armed cops he was assigned as part of “X” security would now include commandos, according to this development.

Salim Khan, Salman Khan’s father and a writer, discovered the threat on a piece of paper that had been put on a bench where he usually sat after his daily stroll. It threatened to “do what we did to Moose Wala” and said, “Salim Khan Salman Khan bahut jald aapka Moose Wala hoga.” It had two initials, GB and LB, which were taken to stand for Lawrence Bishnoi and his Canadian business partner Goldy Brar.

Last month, Delhi Police asserted that criminals attempted to make friends with some of the personnel at the actor’s estate in order to learn more about his schedule.

Although Lawrence Bishnoi has denied any involvement in this “threat chit,” he has previously made threats on Salman Khan’s life.

Lawrence Bishnoi claimed to reporters that Salman Khan had offended the Bishnois, a group that includes a love of animals among its precepts, by going blackbuck hunting. The actor was ultimately found not guilty of this accusation.

According to the Eknath Shinde-BJP government of Maharashtra, the state’s Home department decided to grant Salman Khan ‘Y Plus,’ the fourth highest security grade presently offered in India, following a threat perception analysis.

Salman Khan has had private security for a long time. His primary guard, Gurmeet Singh aka Shera, who has gained some notoriety, keeps an eye on him.

The movie starring Pawan Kalyan and Harish Shankar has been postponed