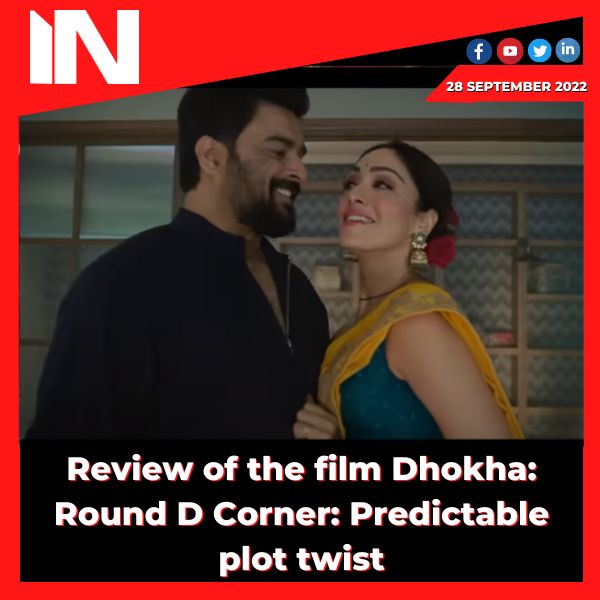 A husband and wife are about to file for divorce when a terrorist breaks into their home and kidnaps the wife. Dhokha: Round D Corner Story The woman has a delusional personality disorder, and her husband is charged with infidelity. Both offer varying perceptions of reality. Which of them is lying, then?

Round D Corner Review of Dhokha The movie gets right to the point; in the first song, it is revealed that the once-in-love Yatharth Sinha (R Madhavan) and Sanchi Sinha (Khushalii Kumar) are about to call it quits. After a confrontation, Haq Gul, a Kashmiri militant, is on the run when Yatharth leaves for work (Aparkshakti Khurana).

Upon returning to the apartment complex after seeing this on the news, Yatharth runs into ACP Harishchandra Malik (Darshan Kumaar) and informs him that Sanchi suffers from a mental illness and can be hazardous when she is having an episode. On the other hand, Sanchi tries to convince Haq that her husband is having an adulterous affair with her psychiatrist and is doing so to prove she is insane.

Similar circumstances exist with Haq Gul and ACP Malik, since they provide conflicting accounts of the former’s status as a terrorist and bomb blast suspect. The spectator makes assumptions about who is telling the truth throughout the film.

A suspense thriller that focuses on conversation and events and is mostly shot in one place must hold your interest long enough for you to sit through it. The work of director Kookie Gulati leaves a lot to be desired in this regard. The movie quickly gets repetitious and tedious, but it picks up steam in the second half when the dialogue grows more heated. Only those who are inexperienced with the genre will find the major plot twist mind-blowing; the course of events is quite predictable. The songs, personalities, and backstories are not well enough developed to be compelling or convincing.

The character of Sanchi, who has a delusional personality condition, is a prime example of this. Only her spouse and psychiatrist can confirm her illness, and there is only one instance to go on. Yatharth claims in a certain incident that Sanchi can use other people as tools to further her goals and that this is the weakness of her mentality. Before you can understand this viewpoint, Malik inquires as to whether it is competence or vulnerability, and the two guys chuckle. Sanchi’s portrayal as manipulative or upset due to her disease, along with this, does a disservice to those who suffer from mental illnesses, especially those with personality disorders, who are rarely well understood.

Having said that, Khushalii does a good job as a debutante pulling off the dual role of a dangerous lady and a delusional, cunning, and attractive housewife. As Gul, Aparkshakti makes an impact and portrays the character’s emotions with ease, whether they are irate, disheartened, or confused and helpless. He accurately captures the twang and appearance of Kashmir. Although R Madhavan and Darshan Kumaar both give strong performances, this isn’t either actor’s best work.

The only two songs, Mere Dil Gaye Ja (Zooby Zooby) redux when the credits roll, and Tu Banke Hawa and Mahi Mera Dil, are both catchy and melodic.

If suspense thrillers are your thing, you might appreciate the movie for the performers, but you might feel let down.

Review of the film Aadhaar: A mediocre mystery ruined by excessive theatrics

BABLI BOUNCER REVIEW : THIS BREEZY COMEDY BOUNCES ITS WAY INTO YOUR HEART