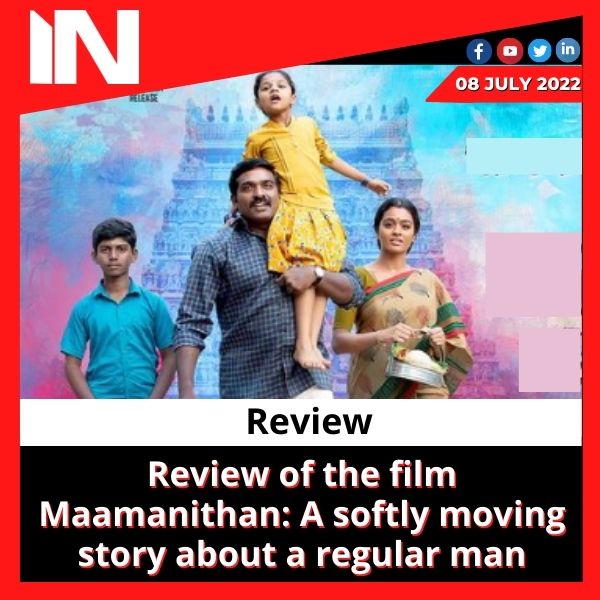 Maamanithan movie review: For the majority of the first half, Seenu Ramasamy’s Maamanithan presents us with a narrative that resembles a collection of heartwarming anecdotes from the life of a regular man. We first meet Radhakrishnan (Vijay Sethupathi), a decent middle-aged auto driver who enjoys a contented existence with his devoted wife Savithri (Gayathrie) and their two adoring children. We witness the other people in his life, including his friend Ismail (Guru Somasundaram), how he got up with this family, and why he decides to strive for a life better than his current one in a flashback that is disguised as a bedtime story that he tells to his young daughter.

He makes a deal with real estate developer Madhavan (Shaji) to assist him sell his plots so he can pay for his children to attend a private school. But Madhavan ultimately succeeds in tricking him, and as he has since fled, he must now deal with the wrath of his village and police action. Can Radhakrishnan find a way to keep his family together and make sure his children receive an education?

The plot of Maamanithan is similar to a refined rendition of Mahanadhi. We had a happy family man with two children as the main character in that movie as well. He merely wanted to go on to the next stage of his life, but he was deceived. But what if he had been able to avoid going to jail and had some outside assistance to make sure his family was safe? What if, instead of brutal wardens, the people he encountered on his path to salvation were upright and modest people, just like him? In essence, Seenu Ramasamy replaces Mahanadhi’s melancholy with Vetri Kodi Kattu’s feel-good fantasy, in which people who are hoping for a brighter future are tricked yet manage to recover through sheer hope.

The subtle way the director lets the drama unfold is what gives this movie its newness. Even the most emotional scenes are delivered in a lifelike way, which helps us identify with the characters and empathise with the predicaments they face. There is no intense emotional outburst or sobbing when a wife learns that her husband has abandoned her to care for herself and her children on her alone. Instead, we witness a person’s calm resolve.

A woman making due with the hand that life has dealt her. Even when a character encounters the person who caused all of his problems, they take the same approach. Even the police are portrayed as compassionate people who care about the family of the individual they are looking for.

However, the director stumbles while pursuing this strategy by providing his protagonist with an overly convenient means of atonement. Radhakrishnan finds a job, friends, and even a surrogate family in the form of a widow and her adolescent daughter as soon as he moves to Kerala. And the person he is after ultimately ends up where he later does. The climax also includes a powerful musical number that has an awkward tone.

Thank goodness, the performances keep us invested in the characters. These days, Vijay Sethupathi may be the only celebrity bold enough to support such screenplays, and he skillfully persuades us to believe Radhakrishnan and his foolishness. Gayathrie does a good job portraying a tenacious housewife, and Guru Somasundaram gives some weight to a somewhat underdeveloped character.

They have good filmmaking to support them as well. The cinematography of M Sukumar, which is always in service of the narrative and is unobtrusive (the numerous long takes never detract from the plot), complements the first half of the movie, which has some of the best filmmaking in this director’s work. Only the music, by Yuvan Shankar Raja and Ilaiyaraaja, is a little lacking.

Maamanithan, a character-driven drama, feels like the last of its kind in these times when big-screen entertainment has primarily come to imply action thrillers and fantasy. When it finally comes to a finish, it evolves into something more—a narrative that is softly moving.

Kartik Aaryan posts a cool photo of himself and his friends while on holiday in Europe.