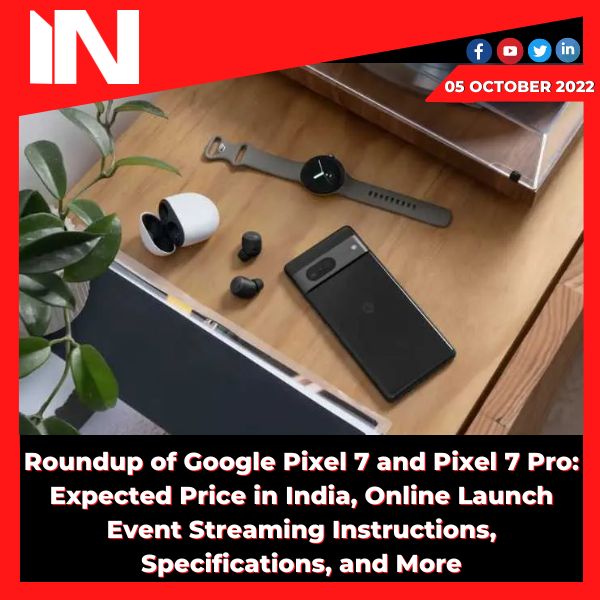 On October 6, the Google Pixel 7 series will go on sale, and this year, Google is also bringing its flagship lineup to India. Google has already provided us with a thorough look at the new Pixel 7 and Pixel 7 Pro smartphones, which will be competing for a spot in the flagship market with Apple and Samsung. The next-generation Tensor chip, which made its debut with the Pixel 6 series last year, is anticipated to be included in the Pixel 7 series.

The Pixel 7 series will be the first group of phones to ship with Android 13 out of the box, according to Google. However, there is still a lot to analyse, particularly in light of what Google is capable of with this year’s Pixel 7 series’ photography capabilities. You can find all the information you require on the Pixel 7’s release date, event time, anticipated features, and more here.

As of right now, we don’t know when the Pixel 7 series will launch in India.

The starting costs for the Google Pixel 7 and Pixel 7 Pro are anticipated to be about Rs. 52,000 and Rs. 75,000, respectively. The Pixel 7 series may start at roughly Rs 60,000 in India, however these are mostly the costs for the Pixel 7 series on the international market. On October 6 at 9:30 AM, pre-orders for Pixel 7 phones open in India.

These days, Google has generally taken on the role of the official leaker, and the firm has once again provided a wealth of information regarding the Pixel 7 smartphones. Even the complete spec sheets for the smartphones Pixel 7 and Pixel 7 Pro have leaked regarding the gadgets. It’s time for the major event after Google teased the new Pixel phones at the Google I/O 2022 keynote this year.

Second-Gen Tensor Chip Upgrade
The in-house chipset that Google developed and debuted with the Pixel 6 series last year has now been used by another manufacturer of hardware. The same processor is used in even the less expensive Pixel 6a. However, Google is including the second-generation Tensor G2 SoC in the new Pixel phones this year. Although we don’t know much about its capabilities, we are expecting that Google has made advancements that will make it a natural follow-up to its original smartphone chip. Google might provide phones with up to 256GB of storage and 8GB or 12GB of RAM.

The Notch And The Display
With the dynamic island, Apple has already demonstrated its tactics; can Google go much further? By offering the Pixel 7 phones with a punch hole cutout at the top, it appears that Google is playing things safe. While Google equips the Pixel 7 Pro with all the bells and whistles, including a QHD+ 120Hz LTPO panel, to justify the higher price tag, the ordinary Pixel 7 is anticipated to have a 90Hz display.

Once more, it’s all about the cameras.
It is difficult to wrap up any discussion of the Pixels without mentioning their cameras, and once again, Google will keep everyone waiting for the specifics. According to the leaks we have found, the Pixel 7 will have two cameras, while the Pixel 7 Pro has three. Additionally, it implies that the Pixel 7 Pro will have three cameras: a 50MP wide-angle sensor, a 48MP telephoto sensor, and a 12MP ultra-wide-angle sensor. However, all of the Pixel magic is based on computational photography, so we are waiting to hear from the source later this week about how the software is adjusted to produce top-notch images.

Additional Details and Features
Like last year, Google will provide an IP68 certification of protection for the Pixel 7 series, support for wired and wireless charging, and once more provide dual biometric features. The phones’ construction is probably going to be a mix of glass and aluminium. Additionally, we anticipate that the Google Pixel 7 series will not include the charger that has been standard, at least among flagship devices. Wide selfies should be possible with the front 10.8MP camera, which will also make video calls simple. Yes, Android 13 will be the primary driver of all the smart features on these devices.

Oppo introduces the A77s in India. Review information about the cost, features, and specifications.

With bank deals and discounts, the Flipkart Big Dussehra Sale 2022 will give an Apple iPhone 13 for less Rs 50,000.