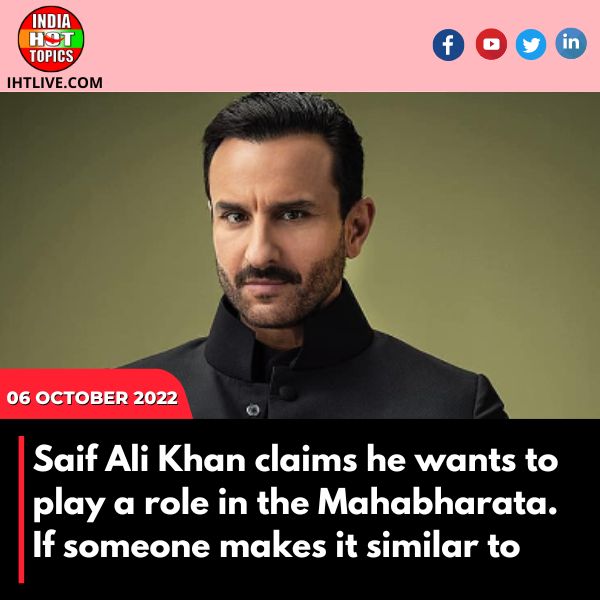 Ajay Devgn and Saif Ali Khan collaborated on the 1999 film Kachche Dhaage, and since then, they have been talking about making a Mahabharata-based movie, according to Saif Ali Khan. However, the actor desires a Lord of the Rings-style adaptation of the Mahabharata.

In a recent interview, Saif Ali Khan was questioned about his ideal role. Saif did mention that he wanted to act in a movie based on the Indian epic Mahabharata, despite the actor’s claim that he only considered the roles that were offered to him. Since the two actors were together in the 1999 movie Kachche Dhaage, Saif also talked openly about talking about the same things with Ajay Devgn.

Additionally, they appeared together in the acclaimed movie Tanhaji: The Unsung Warrior (2020).

Saif, who most recently appeared in the movie Vikram Vedha with Hrithik Roshan, adding that he would like to play a role in the Mahabharata if it were to be adapted into a fantasy epic like Lord of the Rings. Speaking further about the “great” Mahabharata film, the actor expressed his desire to participate in such a venture, whether it be in Bollywood or the south.

“If someone makes the Mahabharata like Lord of the Rings, I’d like to play or act in it. Ajay Devgn and I have been discussing it ever since Kachche Dhaage. It’s the dream subject for our generation, in my opinion. Everyone wants to carry out that.

If at all feasible, we will work with the South and the Bombay film industry to create this magnificent picture, Saif said to Bollywood Bubble.

Pushkar-Vikram Gayathri’s Vedha, starring Saif, is a remake of the same-titled Tamil movie from 2017. Vijay Sethupathi and R Madhavan played the leading parts. Saif will appear in Adipurush with Prabhas and Kriti Sanon in forthcoming films. In the all-Indian movie, Saif plays the part of Lankesh, the adversary. Om Raut is the director of the movie. On October 2, the first Adipurush teaser was released. A portion of online users have criticised it for its VFX and CGI. The mythical epic Ramayana is the inspiration for the movie.

Related Topics:bollywoodIndiamahabharataNewssaif ali khan
Up Next

At the puja pandal, Kajol and Rani Mukerji dress in Bengali sarees for sindoor khela.