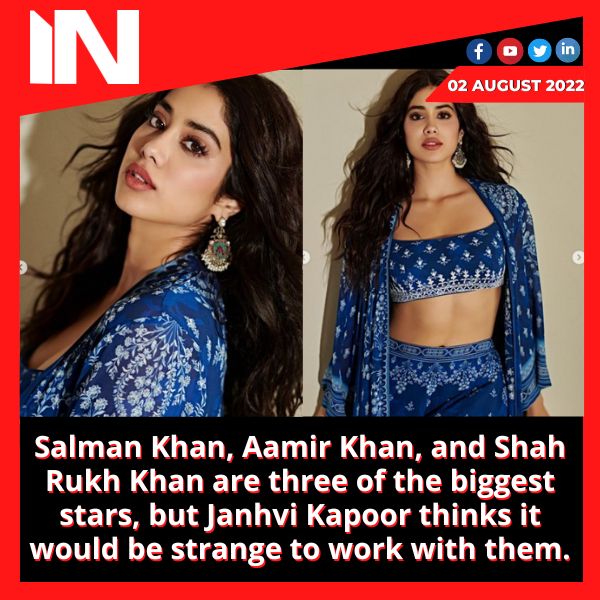 According to Janhvi Kapoor, it would be strange for her to appear in a movie alongside Salman Khan, Aamir Khan, or Shah Rukh Khan. The Khans are in their first half of their fifties while Janhvi is 25.

When asked if she would like to work with Shah Rukh, Aamir, or Salman, Janhvi responded that she would, but she had her doubts about playing their opposite. They are the biggest stars, and everyone wants to work with them, but it would be a little strange if I starred opposite them, she said in an interview with NDTV. Nevertheless, she said she would love to collaborate with them.

She added that Alia Bhatt has greatly inspired her and that she thinks she would look good onscreen alongside Varun Dhawan and Ranbir Kapoor.

She has just started her training for her upcoming movie, Mr. and Mrs. Mahi. Rajkummar Rao appears in the movie as well, and Sharan Sharma is the director. The same director who gave Janhvi her big break with Dhadak is now supporting Mr. and Mrs. Mahi. The movie will debut in theatres on October 7.

Shah Rukh has also announced a few projects, including Pathan and Jawan, while Aamir waits for the release of Laal Singh Chaddha, in which he co-stars with Mona Singh and Kareena Kapoor Khan. Salman also has a few movies scheduled after that. These include Kabhi Eid Kabhi Diwali and the third Tiger franchise instalment.

Advertisement
Related Topics:Janhvikapoorsalmankhanshahrukhkhan
Up Next

As Mumtaz celebrates her 75th birthday, her husband Mayur gives her jewellery, arranges lunch in Uganda, and gives her a Mercedes