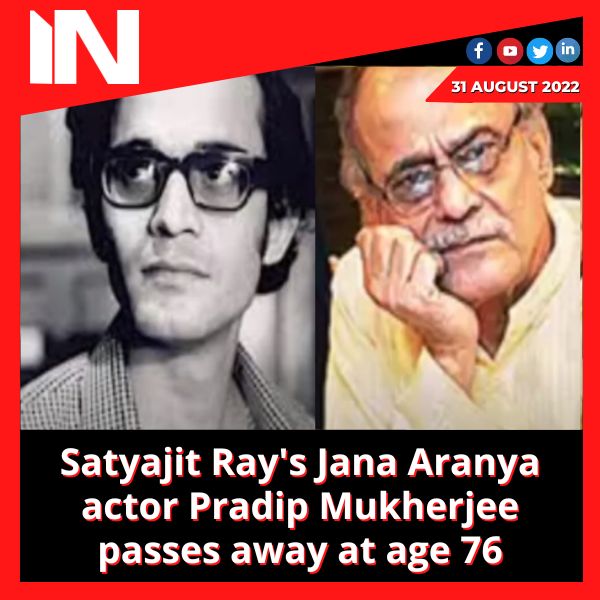 Veteran Bengali actor Pradip Mukherjee passed away on Monday at 8:15 a.m. in a hospital in Kolkata. He was 76. He was transferred to a state-run hospital after his condition worsened three days ago after being taken to a private hospital for a lung infection.

In addition to his wife, Pradip Mukherjee leaves behind a son and a daughter. He had nearly 40 film appearances, including his breakout performance in Satyajit Ray’s Jana Aranya. He played Somnath, the main character, in the movie. His other publications include Mondo Meyer Upakshan (2002) by Buddhadeb Dasgupta and Rituparno Ghosh’s Hirer Angti (1992), among others. Torulatar Bhoot, his most recent release, came in 2021.

Mamata Banerjee, the chief minister of West Bengal, expressed her sadness over Pradip Mukherjee’s passing in a statement on the news of his passing. He had contributed to the films Jana Aranya by Satyajit Ray, Utsav by Rituparno Ghosh, and Dooratwa by Buddhadeb Dasgupta. His passing left a large vacuum.

“Pradip Mukherjee had been discovered by my father in a Bengali stage production and he decided to cast him in Jana Aranya,” filmmaker Sandip Rau, Satyajit Ray’s son, told PTI. He gave a great performance. He truly wished the Ray family well. We suffered a family loss.

The seasoned actor, in addition to Jana Aranya, has appeared in Sandip Ray’s Jekhane Bhooter Bhoy (2012), Badsahi Angti (2014), and Gorosthane Sabdhan, as well as Ray’s Shakha Prasakha (1990). He appeared in Kahaani 2 (2016) by filmmaker Sunjoy Ghosh in addition to Bengali movies, playing the part of doctor Maity.

Dhanashree Verma is having surgery, and Yuzvendra Chahal wants her to recover quickly