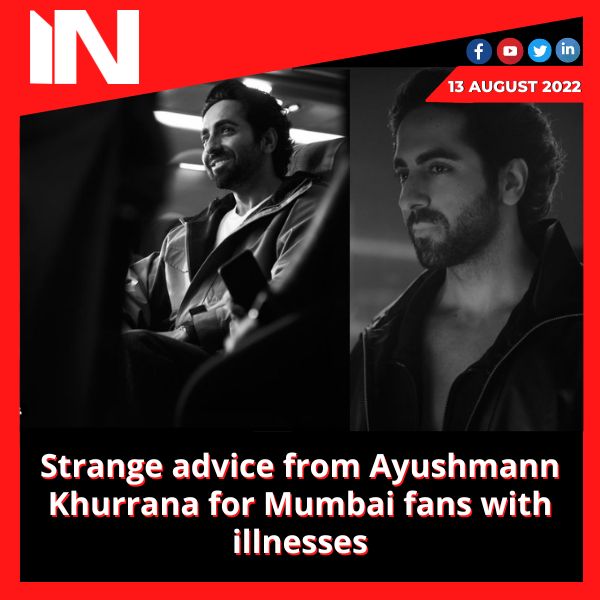 Ayushmann Khurrana made a comment about how many Mumbai residents are battling viral infections as the monsoon season continues. The actor gave his fans a home remedy and advised them to adhere to the superstition of tying a black thread around their ankles or wrists.

(I’ve heard that viral and cold infections are rife in Mumbai. Drink some warm water spiced with black pepper. Additionally, bind your hands and feet with black thread. We have all received the “evil eye.”

What a beautiful picture of you, mere maan!!!! wrote Angad Bedi in response to his post. The image was praised by Saiyami Kher, who described it as a “Lovely shot.” Many of his followers also praised how he appeared in the photo.

Ayushmann last appeared in Anek, a film by Anubhav Sinha. He portrayed a covert agent sent to India’s Northeast to broker a truce between the federal government and the region’s separatist groups. A few weeks after its release, the actor took a flight to Europe for a family vacation.

In Anubhuti Kashyap’s Doctor G, which he describes as being made on a “subject that will make people ponder about an important social issue told in the most entertaining manner,” Ayushmann will now be seen. He calls Action Hero, his other upcoming movie, “super fresh, zany, and quirky.”

Speaking earlier about his upcoming movies, Ayushmann said, “Because of the wide variety of my upcoming films in 2022, I’m hoping for an incredibly exciting year in cinema. I’ve always tried to carefully choose projects that are unusual, and I’m sure I’m bringing audiences the best of what I could find to watch and enjoy on the big screen.”

Janhvi Kapoor shares a throwback photo of Sridevi from the 1990s and remembers her: “Every day I miss you more and more,”