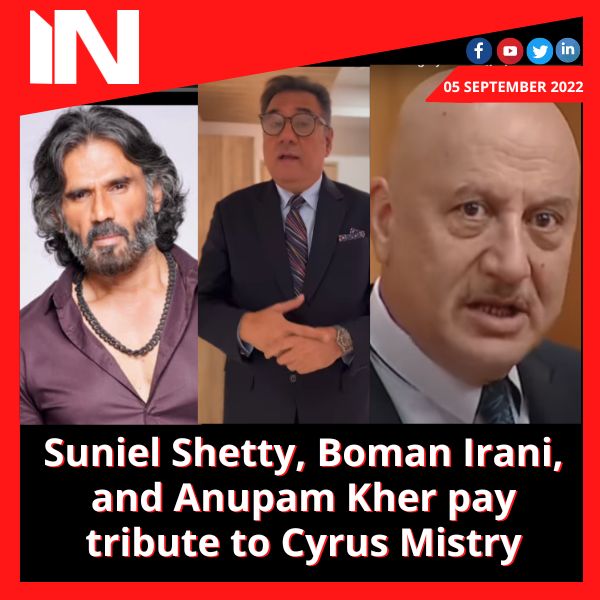 Anupam Kher, Suniel Shetty, and Boman Irani, all actors, expressed their condolences for Cyrus Mistry’s passing. On Sunday, Cyrus was travelling from Ahmedabad when he was killed in a car accident close to Mumbai.

“Shocked and saddened by the news of Cyrus Mistri’s passing,” wrote Boman Irani on Twitter. A significant loss for the nation, business community, and Parsi community. Too young and depressed. “A lovely spirit, a guy with a vision and a mission; Cyrus as I will always remember him epitomised kindness,” actor and politician Smriti Irani added in a tweet. It shocks me to learn of his passing. My sympathies to his family and loved ones. Shanti Om

Earlier, Cyrus’ death was also mourned by Prime Minister Narendra Modi. “It’s terrible that Cyrus Mistry passed away so suddenly. He was a bright businessman who had faith in India’s ability to prosper economically. The business and industrial worlds have suffered greatly since his demise. My sympathies to his family and friends. May his soul rest in peace,” the Prime Minister said in a tweet.

According to the news agency ANI, the Palghar Police said that Cyrus’ automobile struck the divider when he was driving. Two of the four passengers in the automobile, including Cyrus, passed away immediately, and the other two were taken to the hospital. Balasaheb Patil, the superintendent of police in Palghar, claims that the driver lost control of the vehicle after exceeding the posted speed limit.

In October 2016, Cyrus—the sixth chairman of Tata Sons—was relieved of his duties. After Ratan Tata announced his retirement in December 2012, he took over as chairman. Later, N Chandrasekaran took over as Tata Sons’ executive chairman.

Samara, Rishi Kapoor’s granddaughter, posts an old photo in honour of his birthday. The best nana