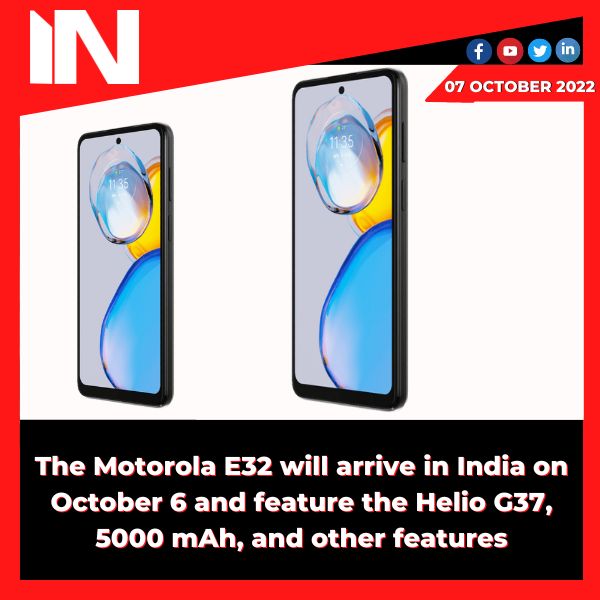 The Moto E32, part of Motorola’s future E series of smartphones, will be on sale in India. The smartphones in Moto’s E series are well-known for being reasonably priced. On May 3, the phone was first introduced to the European market. The 6.5-inch HD+ screen of the Moto E32 has a refresh rate of 90 Hz. The phone has a MediaTek Helio G37 chipset inside, along with 4GB of RAM.

Moto’s most recent E-series device is available in a single 64GB+4GB configuration. Iceberg Blue and Cosmic Black are the two colour options for the phone.

The Moto E32’s price has not yet been disclosed by the manufacturer, however it is anticipated to cost about Rs 12,000 given that the device was initially introduced in Europe at €149. (which is roughly around Rs 12,000). Starting on October 7, it will be sold on Flipkart and in other retail locations.

The 6.5-inch HD+ display on the Moto E32 has a 20:9 aspect ratio, a refresh rate of 90 hertz, and a resolution of 720×1600 pixels. It comes pre-installed with an Android 12-based My UX UI. The phone has a MediaTek Helio G37 CPU inside, along with 64GB of internal memory that can be expanded to 1TB with a microSD card and 4GB of RAM.

Rashmika Mandanna discusses setting boundaries with her parents in the following way: “Don’t try to control my life because…”

Oppo introduces the A77s in India. Review information about the cost, features, and specifications.