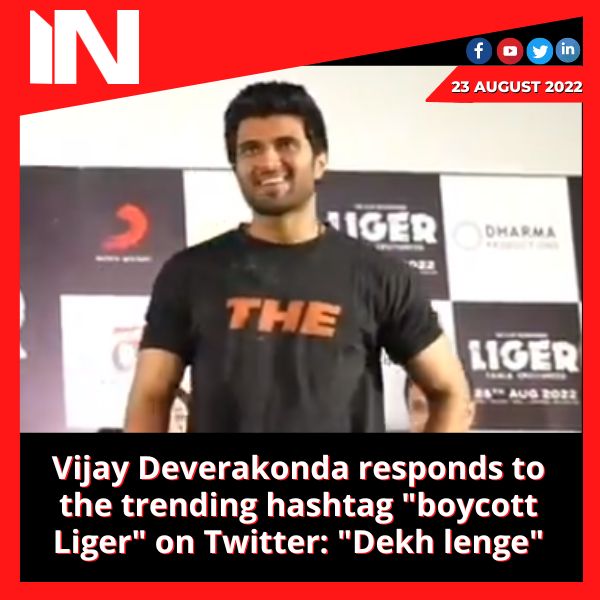 Actor Vijay Deverakonda responded to the recent social media practise of criticising various Bollywood movies. In a recent interview, Vijay responded, “kaun rokenge dekh lenge” (we will see who will stop us), when asked if the trend will effect his upcoming movie Liger. The hashtag “#BoycottLigerMovie” began trending on Twitter days before the movie’s premiere. There have recently been calls to boycott movies like Laal Singh Chaddha, starring Aamir Khan, Raksha Bandhan, starring Akshay Kumar, and the upcoming Vikram Vedha, starring Hrithik Roshan. The tendency has been having an impact on the box office performance of numerous recent releases.

Vijay added that it is unfortunate that movies and actresses must take the brunt of the criticism. He has also stated that he and Liger are confident that the public would approve of the movie because they worked so hard and with much love to make it. The actor also discussed his own problems and professional challenges, as well as how he overcame them.

Vijay said about Liger on Monday, according to the news agency ANI: “With Liger, we expected a bit more drama, but we’ll fight. We have poured our hearts into this movie. And I’m confident that I’m right.

In my opinion, there is no room for dread. I didn’t fear when I had nothing, and I don’t believe that fear is necessary even now that I have accomplished something. We have our mother’s blessings, other people’s affection, God’s support, a fire inside of us, and we will see who can stop us. Maa ka aashirwaad hai, Logon ka pyaar hai, Bhagwaan ka haath hai, andar aag hai, Kaun rokenge dekh lenge!”

Regarding his difficulties, Vijay stated, “I think life has taught me to be a warrior. When I was younger, I had to struggle to get respect and money; as I became older, I had to struggle to find my position in the field and even to find employment. For me, each movie felt like a challenging fight. I made my first movie for free since we couldn’t find a producer to finance it; we had to generate money to pay for the film’s production costs. I had no standing in the field at the time. We encountered opposition before my third movie, Arjun Reddy, even opened in theatres.

On August 25, the sports drama Liger will have its theatrical debut. The movie serves as both Vijay’s and Ananya’s multilingual cinematic debut in Hindi. The movie will be released in Malayalam, Tamil, Telugu, Hindi, and Telugu. Jagannadh, Charmme Kaur, Karan Johar, and Apoorva Mehta are the producers.

Sushmita Sen posts a photo of her, her daughters, and her mother: It is a world for women