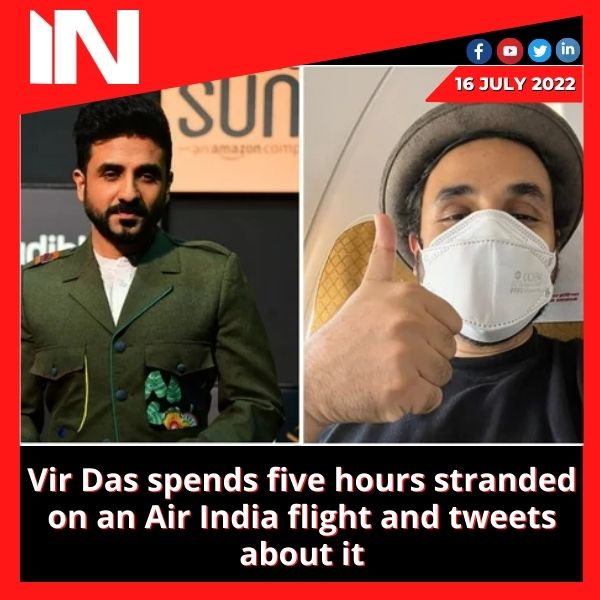 Vir Das revealed on Twitter that he spent over five hours stuck on an Air India flight in Delhi. The comedian made light of the circumstance.
Following Vir Das’ recent nearly five-hour flight delay on an Air India flight, mayhem broke out as passengers quarrelled with crew members. After four hours of waiting, Vir tweeted about his experience and offered his own humorous perspective. Several other Twitter users reacted to this and shared their own stories of airline delays.
In his first tweet in the Twitter thread, Vir reported that he had been waiting for a delayed Air India flight in Delhi for four hours.

Vir reported, “Other flights, according to Air India officials, were cancelled. @airindiain, all other flights have landed. Passengers are starting to rebel. Good times. Men are currently ringing their relatives in Leh to inform them that the weather is clear. The captain doesn’t leave the cockpit. The cabin crew entered. Just the 50 of us are gathered in front of the aircraft. like ravenous men awaiting the opening of Haldirams.”

The comic said, “Now the unfortunate crew is informing the irate passengers that because Air India has stronger safety standards and is safer than other airlines, they are unable to fly. Some guys started using management and business policy jargon. The captain is attempting to communicate from the cockpit. The phrase “sir weather is not on the ground, weather is in the air” has now been reached.” He disclosed that a passenger had even made the tired threat of “writing to the home minister.”

The passengers have reportedly begun shouting, and the manager of Air India is pleading with them to return so that the aircraft can take off, according to Vir. He stated, “The crew and the captain were replaced. We appeared to have experienced a lot together. Best wishes to them. The skipper is now being replaced by a younger one. Hopefully he will drive more quickly.”

Vir started his thread over an hour after the flight finally took off. From his seat, he posted a selfie with a thumbs-up emoji and made the joke, “The aircraft is flying! I could cry from joy. I might because my t-shirt is already covered with perspiration. Perhaps my tears might lower my body temperature because they are colder than my perspiration.” Other Twitter users responded to his remark by sharing their own comparable memories, and some praised Vir for his humorous take on the situation. a user posted, “The most entertaining Twitter thread I’ve read this week is this one. Happy weekend!”

The Bubble, a Hollywood movie that debuted on Netflix on March 25, was Vir Das’s most recent appearance. In addition to Karen Gillan, Keegan-Michael Key, and Iris Apatow, the comedy picture directed by Judd Apatow also starred those actors.