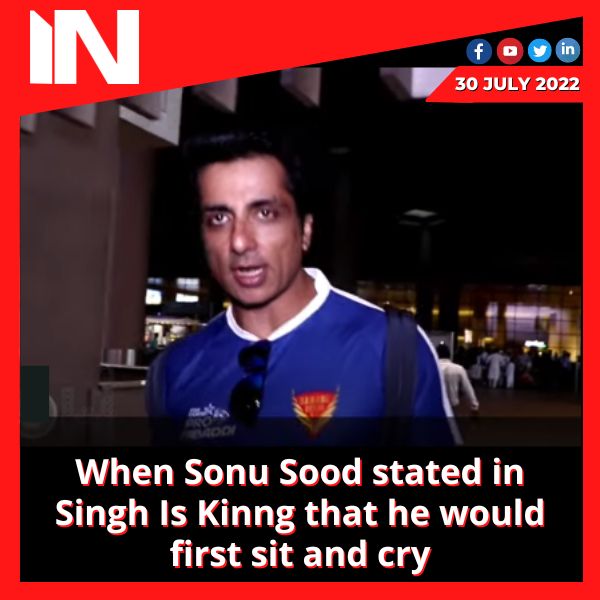 Sonu Sood has appeared in two movies so far this year, but he once considered giving up acting altogether. After he lost his mother Saroj Sood in 2007, this took place. After she passed away, Sonu made the decision to stop acting, but his father Shakti Sood persuaded him to carry on.

The actor, who will turn 49 on Saturday, decided to stay in the film business after all, but found it difficult to work. Before he had to stand up and act out comedy scenes, he once admitted that he used to sit and cry on the sets of Singh Is Kinng. Sonu played a gangster in the movie, which was released in August 2008, less than a year after his mother passed away.

In 2017, Sonu stated to ETimes, “She (his mom) came to the Jodha Akbar sets at ND Studios Karjat on October 1 and she told me that it would change my life. She left on October 4. My younger sister was getting married on October 16, so I was supposed to go home on October 14, but on October 13, I got a call informing me that my mom had passed away in her sleep. I was shivering and did not know how to book my tickets.

Sonu, who is well known for his charitable work, also remembered how his mother was active in charity work and was motivated to follow in her footsteps. He declared, “Every October 13th, I leave everything and return to Punjab to hold a langar and establish a trust to support college students’ academic endeavours. Although that makes me happy, there is currently a sizable void she has left in my life that cannot be filled. All her life, she never accepted payment for her instruction, and I have since met her pupils from all over the world. She would ask me to pick up my scooter and accompany her to a student’s home in the village near Moga if they failed to show up for class.

Shakti Singh, Sonu’s father, passed away in February 2016. Later on in the year, Sonu founded Shakti Sagar Productions in his father’s honour. Sonu last appeared as Chand Bardai in the film Prithviraj, which also starred Manushi Chillar and Akshay Kumar.

Kareena Kapoor Khan addresses the third baby rumour: Am I a machine? Leave it up to me to decide