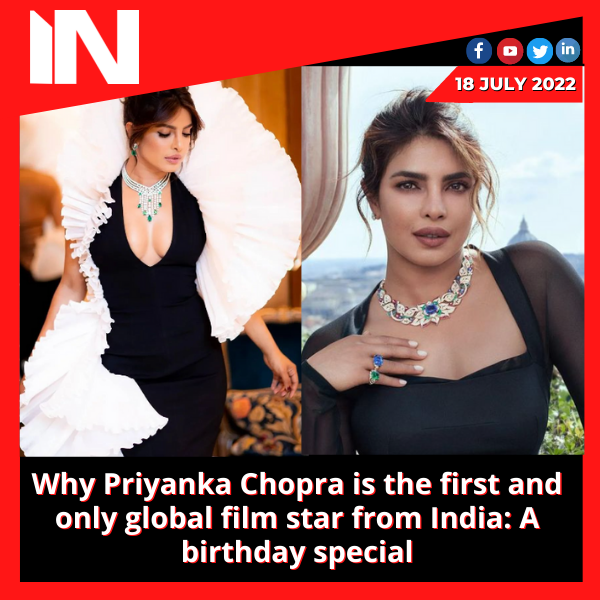 It’s time to recognise Priyanka Chopra for successfully establishing her place in the film industry in the West, where she has been by far India’s most successful export.

Priyanka Chopra was at the height of her career at home in February 2015 when she agreed to star as the protagonist in the ABC thriller series Quantico. She recently appeared in the critically acclaimed and financially successful Mary Kom, and in the upcoming months, Dil Dhadakne Do and Bajirao Mastani will also be released. Despite this, Priyanka made the controversial decision to virtually leave Mumbai for Hollywood in 2016. Since many Indian performers had attempted it, almost none had succeeded. Priyanka didn’t, though. She has been steadily establishing herself as India’s first really international star in addition to succeeding in carving out a name for herself in Hollywood.

Priyanka turns 40 on Monday. This would have signalled the start or end of an Indian heroine’s career in any other era. However, a glance at Priyanka’s next ventures suggests that she might only be getting started. She stars as the lead in It’s All Coming Back to Me, a popular romantic drama, as well as Citadel, an ambitious science fiction series on Amazon Prime Video. As opposed to some of her earlier roles, these are not bit parts. Additionally, these are hardly modest productions. So how, in just seven years, did Priyanka arrive here? In order to comprehend that, it will be necessary to first examine the environment Indian actors encountered in Hollywood.

Other than Priyanka, Indian actors in the West can broadly be divided into two groups: stars who occasionally appeared in cameos or strove to break onto the scene as leads, and character actors who were frequently visible but rarely played the lead. Examples of the former are Rajinikanth (Bloodstone), Amitabh Bachchan (The Great Gatsby), and Dhanush (The Gray Man). There is no shortage of those who fit this description, from Naseeruddin Shah and Kabir Bedi to Om Puri and Amrish Puri. Irrfan Khan and Aishwarya Rai were two actors who achieved long-term mainstream success in Hollywood. However, Priyanka has moved in front of both of them.

Aishwarya’s Hollywood career started with a crossover part in Bride and Prejudice, then Pink Panther 2 gave her the greatest role of all as the bad guy. Not completely unsuccessful, but nothing really noteworthy. In numerous respects, Priyanka has already exceeded her senior. One is that Aishwarya has never worked on a project as large as Citadel or The Matrix Resurrections. She also never served as the face of a popular television show like Quantico. Of course, Irrfan was able to accomplish the first one more frequently than Priyanka. He appeared in the Jurassic Park films, Amazing Spider-Man, and even had a bigger part in Life of Pi. Citadel, though, is where Priyanka surpasses even Irrfan’s illustrious career in the West.

For those who are unaware, Citadel is a vast and enormous sci-fi series produced by Amazon Prime Video with a per-episode budget that exceeds even that of Game of Thrones. Along with Priyanka, it also features Robb Stark Richard Madden from Game of Thrones. She is the face of this genuinely worldwide programme. No Indian actor has ever worked on a project this size or played such a significant part. She is undoubtedly the first Indian global star in terms of fame and body of work.

And Priyanka deserves praise for the course she chose in this situation. Character performers can easily find employment in Hollywood. In larger films, they effectively play the same roles. But with celebrities, it’s different. Indian actors are leery of undermining foreign actors in the West while they rule over there. Priyanka had no such reservations, which helped her get to where she is now—where she doesn’t have to take second place and where The Matrix Resurrections’ producers refer to her as a star despite the fact that she only has a 10-minute cameo. That is only a result of Priyanka Chopra’s current sales.

Many people had the chance to make the transition before her. In Lawrence of Arabia, Dilip Kumar infamously turned down a supporting part that might have helped Omar Sharif gain recognition in the West. According to reports, Amitabh Bachchan’s pay was too exorbitant at the time for him to be convinced to work on Passage to India. For a supporting role in The Expendables more recently, Ajay Devgn declined to spend a year in the US, and Deepika Padukone decided to concentrate on Happy New Year rather than Fast and Furious 7. These actors all made sensible decisions. When a significant Hollywood project came their way, they were each at the pinnacle of their careers, but they chose to stay in Bollywood.

In contrast, when Priyanka began her career with a network television show and later played a villain in Baywatch, she took a higher risk. Her capacity for taking chances sets her apart from previous Indian actors. Many claim that she went to Hollywood since there weren’t enough roles for her at home. Whatever the reasons, Priyanka succeeded because she gave it her best shot. Many other Indian celebrities have been unwilling to leave their safety cocoon, yet she did. And it’s high time we treated her with the deference she merits for her incredible journey.

In response to rumours that she is pregnant, Kareena Kapoor said, “Saif Ali Khan has contributed much too much to the population.”

Fans comment that Shah Rukh Khan is as attractive as ever after being spotted in plaid in leaked photos from the London sets of Dunki.