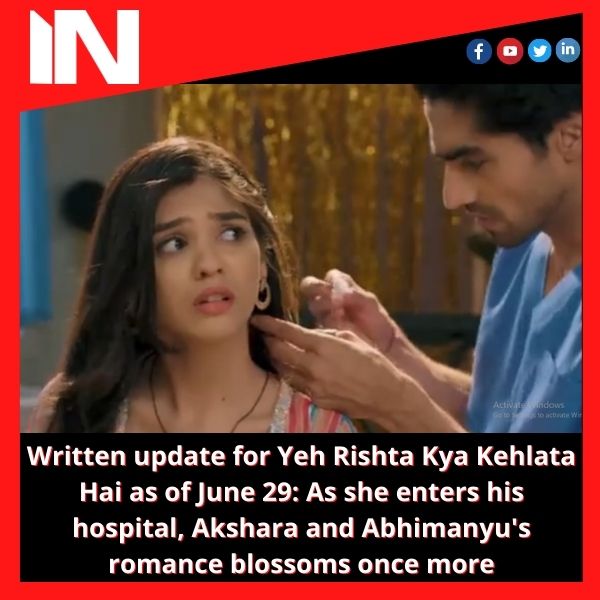 The couple’s romance has returned when Akshara rejoins Birla Hospital’s music department. The popular pair from Yeh Rishta Kya Kehlata Hai will be reuniting in this episode. There may still be some challenges they need to get beyond before they can put their previous conflict behind them. Learn more by reading this article.

We watched Abhimanyu being upset with Mahima and Anand in the last episode for pressuring Akshara to rejoin Birla Hospital, only to learn that she had chosen to accept the position back. He quickly becomes calm and is taken aback by Akshara’s choice. However, as he strolls alongside Akshara in the hospital once more, his joy appears to know no bounds. Akshara can’t help but rejoice as well because staying near to Abhimanyu was one of the reasons she first joined the hospital.

Mahima, on the other hand, advances to the subsequent stage of her covert scheme. She is happy that Akshara and Abhimanyu are cooperating, and she believes that their work will help them to resolve their differences and reunite. Will Manjari’s supplications be answered? For more information, keep reading.

Mr. Bijoria arrives to welcome them while Abhimanyu assists Akshara in getting comfortable in the hospital once more. The two of them are invited to a party by him. Even though they agree to go, they debate whether or not to invite each other as well. In the middle of this conflict, they miss Mahima’s presence.

Moving right along to the second element of her scheme. She urgently summons Parth to the hospital. As soon as Harshvardhan develops suspicions, he requests updates from his contacts at the hospital. The subsequent events greatly surprise Parth, Abhimanyu, and Akshara.

Parth becomes irritated when Mahima offers him the CEO position at Birla Hospital since he doesn’t want the role. Mahima and Anand refuse to back down, while Parth keeps freaking out despite Abhimanyu’s attempts to calm them all down. Mahima worries that she will lose all power if Parth declines the role and Abhimanyu is forced to take over as CEO of the Birla Hospital. Will her strategy be effective in preventing Abhimanyu from joining the hospital’s administration?

Abhimanyu and Akshara both show up at the party in the upcoming episode, but a minor misunderstanding keeps them apart. Will they be able to put aside their differences and get along again? For more developments, keep reading HT highlights.

Advertisement
Related Topics:abhimanyuaksharablossomsentersFeaturedhospitaljunemoreupdatewrittenyehrishtakyakehlatahai
Up Next