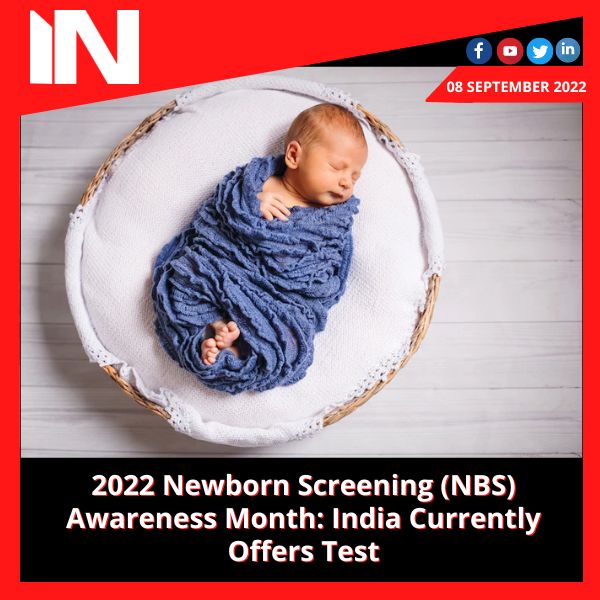 It might be difficult for paediatricians to make an early diagnosis of inborn metabolic errors (IEM) because the majority of these illnesses have no symptoms when a baby is first born. The majority of IEM instances are discovered a few days or even a few years after birth, by which point the brain has already suffered irreparable damage that puts the patient’s life in danger or has caused additional disabilities.

The most crucial test to identify these conditions early is newborn screening (NBS), which allows for early intervention and therapy for the kid. This article will tell you everything you need to know about the newborn screening tests that are now available in India, the state of newborn screening testing there, and any potential future trends. September is Newborn Screening Awareness Month.

Dr. Suresh Birajdar, a neonatologist and paediatrician at Motherhood Hospital in Kharghar, stated in an interview with HT Lifestyle that “the screening is done before babies are discharged from the hospital, or shortly after birth. The disorders that are examined during newborn screening have a history of seriously affecting children’s or infants’ health. Physical and intellectual problems can be avoided by identifying these disorders quickly and treating them. When it comes to metabolic and genetic abnormalities, newborn screening (NBS) is crucial since early diagnosis and treatment can help to avert both physical and mental impairments as well as life-threatening illnesses.

In response to a question about the procedure in our nation, he stated, “In India, newborn screening is done to determine whether the child has any issues, such as hearing loss, congenital hypothyroidism, congenital adrenal hyperplasia (CAH), glucose-6-phosphate dehydrogenase (G6PD) deficiency, and a few other metabolic conditions. If not treated before the age of six months, congenital hearing loss is a serious disorder that can affect speech and hearing permanently. Another frequent condition in infants and one of the preventable causes of intellectual impairment is congenital hypothyroidism.

Congenital adrenal hyperplasia can result in mortality, morbidity, or genital abnormalities if it is not diagnosed at birth, the doctor warned. In our nation, G6PD deficiency is a frequent illness that can lead to anaemia and jaundice in youngsters. The newborns should also be screened for diseases like phenylketonuria, homocystinuria, alkaptonuria, galactosemia, sickle cell anaemia, hemoglobinopathies, heart issues, mucopolysaccharidosis type 1, severe combined immunodeficiency (SCID), cystic fibrosis, biotinidase deficiency, maple syrup urine disease, medium-chain acyl-CoA dehydrogen

Dr. Suresh Birajdar elaborated, “After allowing the paper to dry, it is sent to the laboratory, where numerous different newborn screening tests are performed, explaining that newborn screening is a blood test that requires a few drops of blood to be collected on a special filter paper by pricking the heel of the child. Tandem mass spectrometry is the name of the technique utilised to conduct these tests. The baby is unharmed as a result of the heel poke. Each baby receives a lancet, a specialist needle, and there is no chance of infection. Through screening, more than 100 metabolic and genetic disorders can be found.

Dr. Suresh Birajdar noted that congenital cardiac disorders and genetic anomalies are more common in infants and added, “Due to parents’ increased awareness about NBS, they are not skipping the tests as they are proactive when it comes to the child’s health. Now that hospitals and doctors are advising couples about screening to find various health risks in the babies, NBS has become a priority. Along with India, NBS is successful in many other nations, thus parents should be urged to choose the screening option for their newborns. The NBS is in demand because infants are having more metabolic, endocrine, genetic, and haemoglobin issues.

If not identified and treated in a timely manner, inborn metabolic errors, or IEM, can be harmful and even fatal. IEM cause physical issues and damage to the brain. Even if a kid has a disease, there is a chance that they won’t exhibit any symptoms of it when they are delivered, according to Dr. Suresh Birajdar. In contrast, NBS can identify and identify these problems at birth and assist the child in leading a healthy life. Amino acid disorders, fatty acid disorders, organic acid disorders, endocrine diseases, and haemoglobin problems are all testable by NBS.

The coronavirus’s shape has an impact on how it spreads