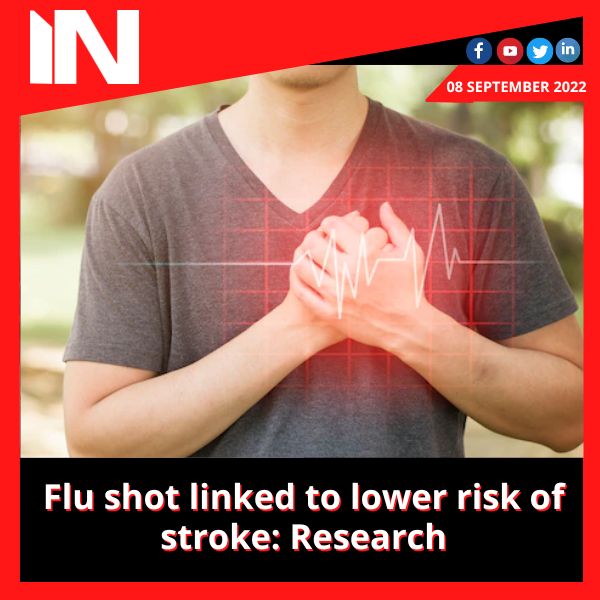 A study suggests that receiving an annual flu shot may reduce the risk of stroke.

Study author Francisco J. de Abajo, MD, MPH, PhD, of the University of Alcala in Madrid, Spain, said: “Studies have indicated that having the flu raises your chance of having a stroke, but evidence is still being gathered on whether getting the flu vaccine can help guard against a stroke.” “According to this observational study, receiving a flu vaccination lowers stroke risk. More investigation is required to understand if this is brought on by the vaccine’s protective impact or by other factors.”

The most prevalent type of stroke, ischemic stroke, which is brought on by a restriction in blood flow to the brain, was the subject of the study.

In order to gather data for the study, researchers searched a Spanish healthcare database for individuals who were at least 40 years old and had their first stroke within the previous 14 years. Five people of the same age and sex were compared to each stroke victim. There were 71,610 persons who did not have a stroke and 14,322 people who did.

Then, for individuals who did not experience a stroke, the researchers looked at whether persons had received the influenza vaccine at least 14 days before to the stroke.

In comparison to 40.5% of those who did not have a stroke, 41.4% of those who did had had the flu vaccination. However, those who received the shot had a higher likelihood of being older and having additional health issues, such as high blood pressure and high cholesterol, that would increase their risk of having a stroke. After adjusting for those variables, researchers discovered that people who took a flu shot had a 12% lower risk of having a stroke than people who did not.

Additionally, the risk of stroke was examined to determine if the pneumococcal vaccine had any preventive effects.

These findings provide just another justification for people to obtain their annual flu shot, especially if they have a higher risk of stroke, according to de Abajo. “It is incredibly tempting to be able to lower your risk of stroke by doing something so straightforward.”

As an observational study, it cannot be concluded that the flu shot lowers the risk of stroke. Only an association is displayed. Other elements that potentially have an impact on stroke risk were not measured.