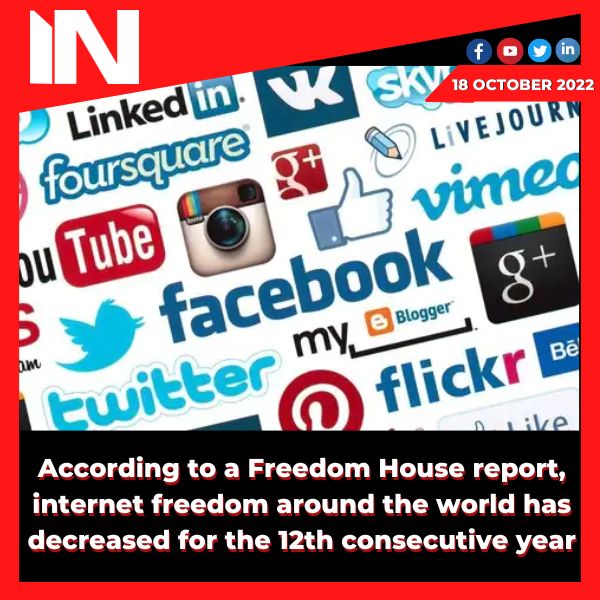 Although some smaller nations are making progress, a crackdown in Russia is to blame for a global deterioration in internet freedom, according to a research released by Freedom House on Tuesday.

In an effort to suppress additional accounts of its “special military operation” in Ukraine, the Kremlin blocked popular social media sites and websites, causing Russia’s rating to fall seven points to an all-time low.

China received the lowest rating for internet freedom once more. The Covid pandemic reaction and the Beijing Winter Olympics were heavily censored, and tennis player Peng Shuai was detained after she claimed on social media that former vice premier Zhang Gaoli had attacked her.

However, the report also found that a record 26 countries have advanced, with major improvements in The Gambia, which is ending a 20-year dictatorship, and the much criticised Zimbabwe, which has advanced with a new data protection law.

The report’s co-author, Allie Funk, stated that civil society has started to see the results of advocacy efforts all across the world.

According to Funk, research director for technology and democracy at Freedom House, “over the past three to five years, you’ve seen a massive emphasis on human rights online, from democratic governments putting a lot of money into internet freedom programming and tech companies — some of them — starting to pay attention to these issues.”

Internet freedom was “undermined by Russia’s invasion of Ukraine, not only in Russia and Ukraine but globally,” she claimed, but overall, things are “really a lot more good than we’ve experienced before.”

On a scale of 100 points, Freedom House rates countries based on factors such restrictions on internet access, content restrictions, and user rights abuses.

According to the paper, “swing states”—vast countries with conflicting histories like Brazil, India, and Nigeria—will likely decide the future of the internet.

The research stated that “development in these nations may secure the continuation of a free and open internet, or they could join authoritarian states in pushing the more restrictive concept of cyber sovereignty.”

The study discovered safeguards on the internet, such banning  of sites or arrests of internet users, between June 2021 and May in all the 70 countries it studied except four — Canada, Costa Rica, Iceland and Japan.

The nicest admission from Katrina Kaif is that “Vicky calls me his panic button.”

Review of the movie “Prey” on Disney+ Hotstar: Amber Midthunder’s Survival Thriller Is A Proper Addition To The Predator Saga