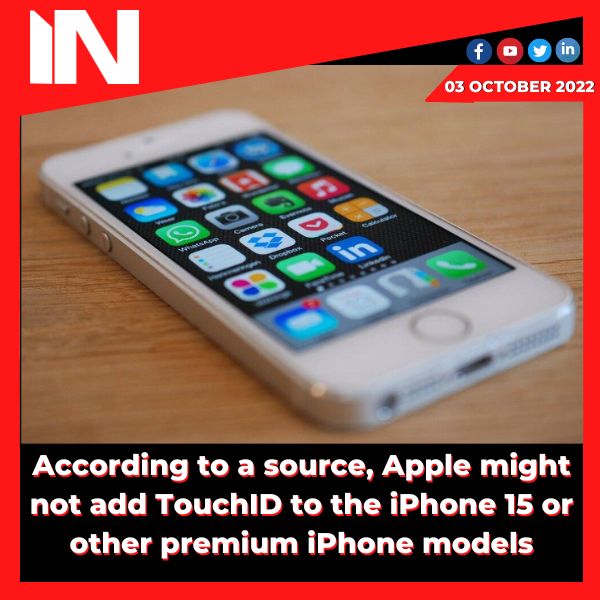 Apple won’t be releasing a new iPhone with TouchID anytime soon, according to Mark Gurman of Bloomberg. Gurman revealed that TouchID will not be included on the iPhone 15 in his most recent Power On email. Additionally, he stated that it is doubtful that TouchID will soon return to high-end flagship iPhone models.

Apple did test TouchID on subsequent iPhones internally; but, the biometric sensor was not added to the company’s premium models. Apple improved security without sacrificing convenience when it released the Touch ID fingerprint biometric sensor on the iPhone 5s nine years ago. Later on, Touch ID was added by Apple to iPads, MacBooks, and even iMac keyboards.

There have been discussions within Apple over the past few years about putting Touch ID back to high-end iPhones. In-screen Touch ID has been tested by the firm, and it has even been discussed for the power button. At this point, I think Face ID is here to stay and Touch ID won’t be coming back to the top-tier iPhones any time soon.

The iPhone SE and various iPad models, including the iPad mini 6, still support Touch ID. However, it’s still restricted to Apple’s entry-level gadgets. Additionally, Apple’s Face ID for flagship devices allows you to unlock the device with only a glance. Both the iPad Pro and the iPhone 14 have it. According to rumours, Apple plans to add both in-display TouchID and FaceID to iPhone, but it appears that Cupertino will take some more time to perfect the technology before it reaches your device.

Ming-Chi Kuo, an Apple analyst, had predicted that Touch ID would return to the iPhone in 2025. He cited production or development problems as the cause of the delay.

Launch of JioBook, a 15,000 rupee 4G-capable laptop, by Reliance Jio