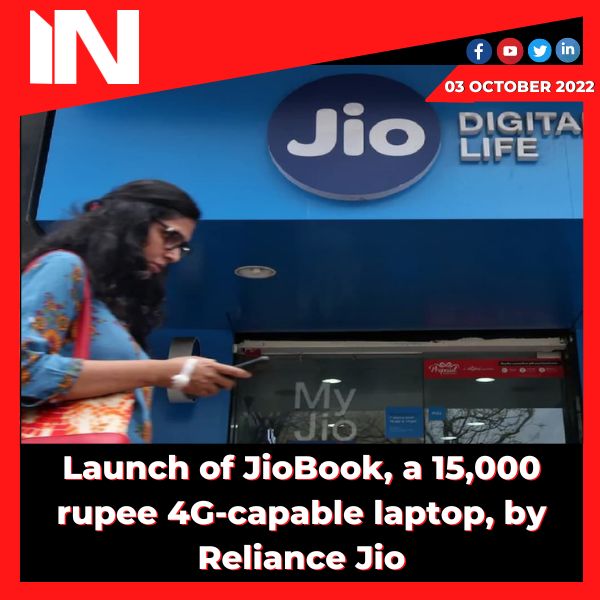 In New Delhi: According to two people who spoke to Reuters, Reliance Jio will introduce a low-cost laptop with an inbuilt 4G sim card for $184 (15,000 Indian rupees), hoping to duplicate the success of its low-cost JioPhone in India’s very price-sensitive market.
For the JioBook, the Mukesh Ambani-led conglomerate has worked with tech behemoths Qualcomm and Microsoft, with the former providing its computer chips, which are based on Arm Ltd. technology, and the latter offering support for some apps.

With more than 420 million customers, Jio is India’s largest telecom provider. Jio did not immediately react to a request for comment.

The laptop will be made accessible to business users this month, including universities and government agencies, with a consumer launch likely within the next three months, according to sources. A 5G-capable version will come after, much like with the JioPhone.

One of the persons with intimate knowledge of the situation told Reuters that “this will be as large as JioPhone.”

According to Counterpoint, the device has been India’s best-selling sub-$100 smartphone since its late-year launch, holding a fifth of the market for the past three quarters.

According to one of the sources, Flex, a local contract manufacturer, would produce the JioBook, with Jio hoping to sell “hundreds of thousands” of them by the end of March.

According to the research company IDC, 14.8 million PCs were shipped to India overall last year, with HP, Dell, and Lenovo leading the way.

According to Counterpoint analyst Tarun Pathak, the introduction of the JioBook will increase the overall addressable laptop market sector by at least 15%.

Jio’s own JioOS operating system will be used on the laptop, and programmes may be downloaded via the JioStore. Jio is promoting the laptop as an alternative to tablets for corporate workers who work outside of the office.

According to a source, Apple might not add TouchID to the iPhone 15 or other premium iPhone models.

A good 5G phone under Rs 15,000 is necessary. Look at these possibilities