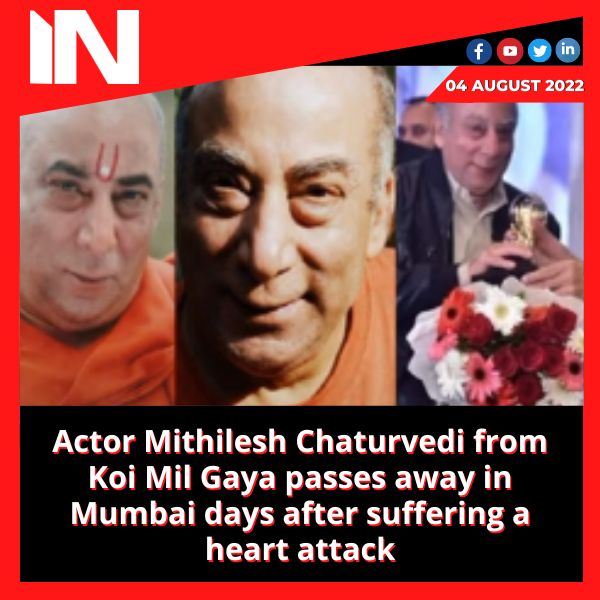 At the Kokilaben Hospital in Mumbai, actor Mithilesh Chaturvedi, who appeared in numerous movies like Koi Mil Gaya and Satya, passed away. Ashish Chaturvedi, his son-in-law, shared a post on Facebook on Thursday morning to confirm the news.

Ashish released a number of images of the deceased actor. In Hindi, he wrote “When the world is at its worst, aapne mujhe dhamaad nhi balki ek bete ki tara prem diya. You were the world’s greatest father, Bhagwan aapki aatma ko shanti pradan kare. You showed me love in a way that befitted a son, not a son-in-law. May God grant you eternal peace.”

Anil Rastogi, a seasoned theatre performer who collaborated with Mithilesh on several plays at Lucknow’s Darpan Theatre Group, also provided confirmation of his passing. Anil told Hindustan Times that “he was admitted there for the last few days after a heart attack.” Hansal Mehta, a filmmaker, announced the news in his Instagram Stories. He left Mithilesh’s picture with the words “RIP Mithileshji.”

In addition to Gadar: Ek Prem Katha, Asoka, Ready, Mohalla Assi, and Krrish, Mithilesh worked in a number of other movies. Additionally, he participated in the web series Scam 1992: The Harshad Mehta Story.

Fans sent their condolences as well. “Actor #MithileshChaturvedi, well-known in theatre and film, passes away from a heart condition. May the soul of the deceased rest in peace, “a user of social media tweeted. Another wrote, “Sad news, rest in peace sir.”