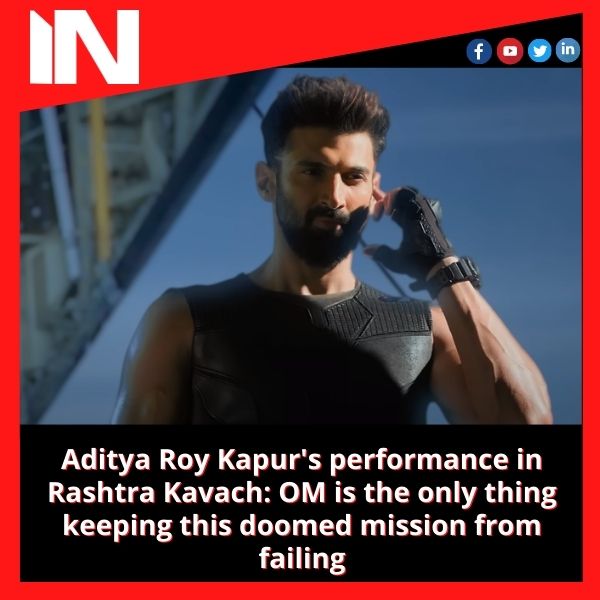 STORY: A paracommando is serving the country on a top-secret mission. However, he soon discovers that his personal and professional lives are entangled with many layers of lies, betrayal, and deceit as he heads to work with his excellent combat skills. Can he even trust himself?

REVIEW: Covert operations, a highly talented fighter, and a top-tier government organisation are all working together to preserve the country. These are a few of the essential components for a story that provides plenty of room for thoughtless action, hearty patriotism, and complicated plot twists. That’s “Raksha Kavach Om” for you in a nutshell; on paper, it must have met all the requirements for a sleek actioner, but it lacks the same impact on screen.

The location for director Kapil Verma and his writers’ ambitious thriller is perfect, but the writing is clumsy and disjointed. Om (Aditya Roy Kapur) is summoned on a crucial mission at the beginning of the movie, but the attack leaves him wounded and only partially alive. When he awakens, he has forgotten everything, and he is now scrambling to understand his history and present. Kavya (Sanjana Sanghi), who can really kick butt when it comes to defending her team mates, is in charge of looking after him. They have their work cut out for them, but in the midst of it all, Om still needs to track down his father and persuade everyone that he was not a traitor.

The story is overstuffed with subplots, making it overly complicated. Every large-scale and little occurrence on the screen is accompanied by an ear-piercing background soundtrack. The action choreography, though, is unquestionably a bonus and partially makes up for the generally drawn-out and tiresome storyline. In his new masculine persona as an outright action hero, Aditya Roy Kapur is smouldering. It is evident on screen how much time and work he put into physically changing himself for the part. His action is great, and he can certainly explore this genre more. Sanjana Sanghi is one of the few females in this exclusively male field, yet neither her part nor her performance stand out. Ashutosh Rana carefully performs his part, but Prakash Raj appears to be very stereotyped. Jackie Shroff as scientist Dev is aptly cast.

Rashtra Kavach Om is at least as fantastical and unbelievable as its name. However, if you’re a devoted follower of Aditya Roy Kapur, this task might not be so hopeless for you.