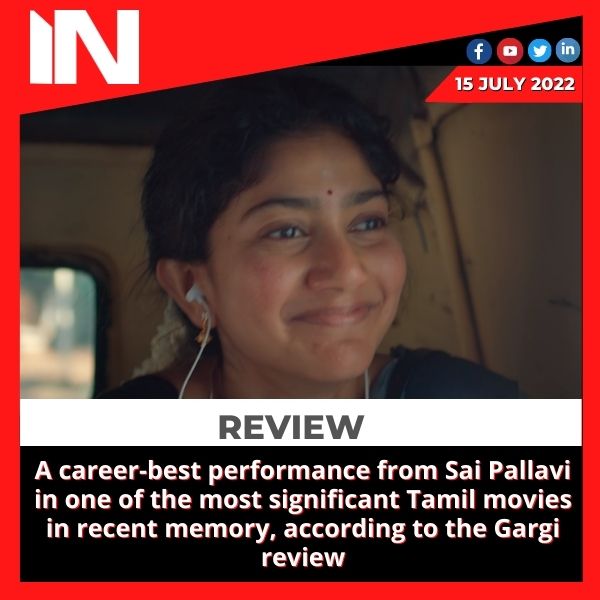 Sai Pallavi gives one of the most moving performances by a mainstream heroine in recent memory in Gautham Ramachandran’s Gargi. It is a sobering story about a daughter’s struggle for justice. The movie, which is unquestionably the best Tamil film of the year so far, focuses on a very delicate subject and handles it with an uncommon level of empathy that is hard to find these days. Gargi is a breath of fresh air in a time when star power and overt machismo are the only things that matter in popular cinema. It has a lasting impression.

Gargi, a teacher who is from a lower middle class household, is portrayed by Sai Pallavi. Her mother produces and sells idli batter from her home while her father works as a security guard in a local housing society. She has a younger sister who attends school. Gargi has no significant life goals and her family is her priority in life. When her 60-year-old father is listed as an accused party in a gang-rape case involving a young girl, her life is suddenly flipped upside down. The remainder of the narrative is on Gargi’s pursuit of justice and the difficulties she encounters along the road.

Gargi examines the effects on a family when one of its members is the main accused in a rape case from a social perspective. The movie depicts what it means to be affiliated with someone accused in something as delicate as a rape case, even if they are presumed innocent until proven guilty. This includes media sensationalism and risking ostracism. The movie challenges us as a culture to think carefully before drawing conclusions based on frequently misinformation spread by the media. It is extremely uncommon for mainstream Tamil cinema, which is known for catering to the public by going the commercial path, to approach such a subject so carefully, and the script deserves special appreciation for handling it so sensitively.

The writing, namely the dialogue, is what gives Gargi its power. Gautham Ramachandran’s handling of the material, the haunting and beautiful imagery, and the overall approach to the rape portion of the story serve as evidence of his sensibilities as a director. He pulls the emphasis away from the incident’s tragedy and onto the drama that ensues, which is what makes the proceedings so engrossing and immersive.

Sai Pallavi is the star of this show throughout. She shows that she still has a lot of untapped potential in what is undoubtedly her best performance of her career. It’s a performance that will affect you profoundly. What deserves more appreciation is the conviction to choose this role and to play it with such care and compassion (of the character’s suffering). There probably won’t be a Tamil movie heroine performance this year that can top this one. The casting of the movie is another noteworthy aspect. It was a stroke of genius to cast Kaali Venkat, who typically plays comedic roles, in a crucial lawyer position. The rest of the casting is also excellent. The soundtrack by Govind Vasantha brings the picture to life.