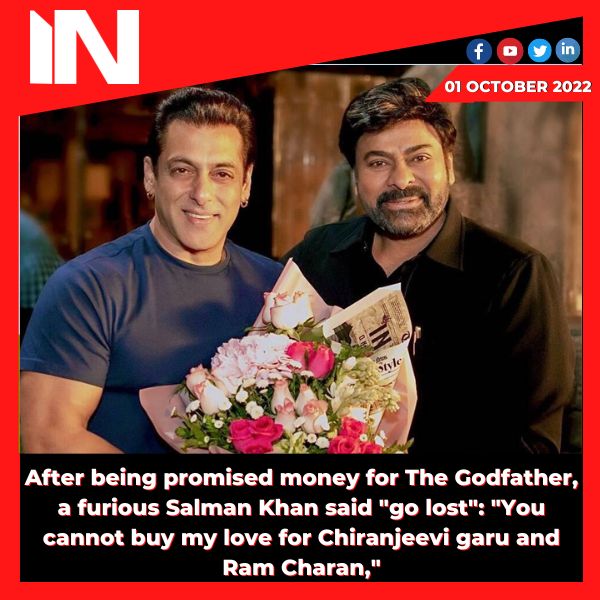 Salman Khan of Bollywood graciously accepted to take on a small role in Telugu megastar Chiranjeevi’s next film GodFather, a remake of the movie Lucifer. Salman declined to accept remuneration for his cameo and agreed to act in the film without having read the screenplay.

In a recent interview, Chiranjeevi explained how GodFather’s director Mohan Raja came up with the idea for Salman to play the part. Because the Bollywood star “respects all of us and the same way we respect him so much,” according to Chiranjeevi, who spoke to the filmmaker, he will try to bring him on board.

Salman quickly responded to Chiranjeevi’s message with, “Okay, yeah Chiru garu, what do you want,” according to Chiranjeevi in an interview with Film Companion. “I told him it’s a little character but extremely respectable, and you may watch Lucifer in case you wish,” the Telugu actor stated. “No, no, Chiru garu, I’m doing it,” he retorted. Send your person, and we’ll talk about scheduling and everything. Within two to three minutes, he consented.

Ram Charan, the Godfather’s producer and Chiranjeevi’s son, then visited Salman. Salman addressed him by saying, “Charan, you are my brother. I want to accomplish that without a doubt. I don’t have to watch Lucifer. Send someone to narrate my character, please.

Salman steadfastly declined to take payment for his GodFather role. “You cannot buy my love for Ram and Chiranjeevi garu with money,” he replied when my producers went to him with an offer; they did not know how much it was. Chiranjeevi said. ‘Go away.’ Chiranjeevi was overcome by “love and devotion for Sallu bhai” after seeing Salman’s gesture.

Chiranjeevi had earlier promised the audience at a pre-release event for the movie some pyrotechnics with him and Salman sharing the screen. “Salman Khan has agreed to entertain you as the show draws to a close on my behalf. It turned out beautifully,” he added.

Salman Khan and Chiranjeevi are featured in the Hindi and Telugu versions of a promotional song called “Thaar Maar.” The movie will premiere on October 5.

In response to Vijay Deverakonda romance rumours, Rashmika Mandanna said, “It is all so cute.”

Every Sidnaaz fan’s heart will skip a beat when they hear Shehnaaz Gill’s performance of “Jo Bheji Thi Dua.”