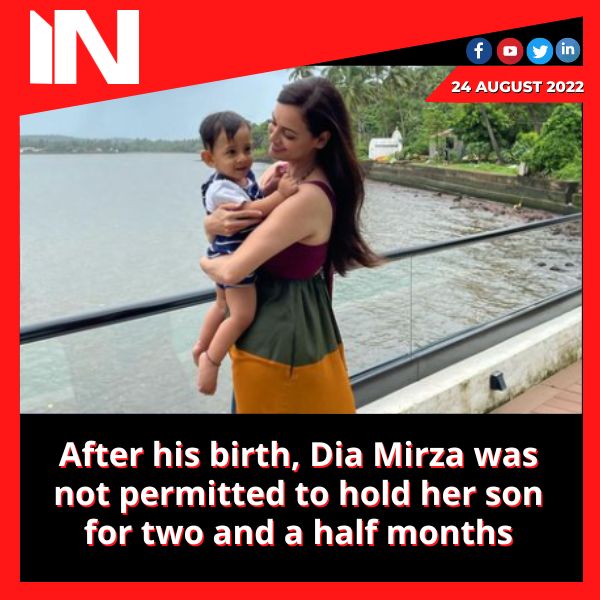 In May 2021, Dia Mirza gave birth to a boy named Avyaan Azaad Rekhi. The actor recalled the birth, describing it as “life-threatening” for both the mother and the baby. Dia also discussed not being able to hold Avyaan after his birth in a recent interview. She claimed that because he was born prematurely and required surgery, she was unable to do so for two and a half months after his birth.

Dia wed Vaibhav Rekhi, a businessman from Mumbai, on February 15, 2021 in a small ceremony there. In July 2021, Dia announced the birth of her first child on Instagram, three months after announcing her pregnancy online.

The actor wrote a touching note beside a photo of her holding her newborn baby’s hand. An part from the message said, “Our heartbeat, our son Avyaan Azaad Rekhi was born on May 14th. Our tiny miracle was delivered early, and since then, the Neonatal ICU’s devoted nurses and physicians have been taking care of him/her.

Dia recently discussed the difficulties she faced as a new mother—who was not even permitted to hold her child—in an interview with Bollywood Hungama. Dia not only talked openly about the difficulties she encountered throughout her pregnancy and childbirth. It was incredibly difficult. As a result of my illness, I had to have appendix surgery in the fifth month of my pregnancy.

That must have caused a bacterial infection to spread throughout the body. The doctor told me to remove the baby because my placenta was haemorrhaging or I would have developed sepsis. The infant had to have surgery within 36 hours of delivery, and it was life-threatening for both of us. He had to have a second surgery three and a half months after his birth. Throughout that period, he was in the NICU. Even after he was born, two and a half months later, I was still not permitted to hold him, Dia recalled.

Avyaan’s birth condition was also disclosed by Dia, who said that he was “fragile” and that she could only see him “twice a week.” He was so little and delicate, and it was the Covid-19 era, so I had to abide by a tonne of additional rules and guidelines. Only twice a week were my visits with my infant permitted. So it was incredibly difficult, but I never lost hope that he would stick by me and struggle to live,” Dia added.

The last time we saw Dia was in Thappad, a movie by Anubhav Sinha. Taapsee Pannu played the lead in the movie. Soon, you may witness the actor in Tarun Dudeja’s Dhak Dhak. Sanjana Sanghi, Ratna Pathak Shah, and Fatima Sana Shaikh are also featured. Additionally, Dia and Anubhav will collaborate once more on the latter’s upcoming movie Bheed, set for release later this year.

In response to a Canadian director who dubbed The Kashmir Files rubbish, Vivek Agnihotri