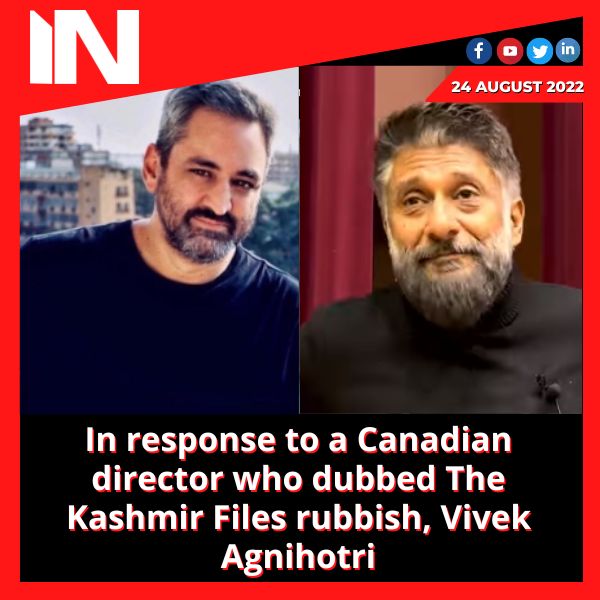 Filmmaker Vivek Agnihotri has addressed Dylan Mohan Gray’s criticism of his movie, The Kashmir Files, days after he garnered attention for his response to Anurag Kashyap’s statement that it shouldn’t be submitted to the Oscars. Recently, the Canadian director tweeted that The Kashmir Files was “hatemongering crap” and would humiliate India if it were nominated for an Oscar. In response, Vivek has said that “someone sitting in Canada” may have seen his movie in the first place. He may not be a talented filmmaker, but Vivek said he is aware of politics.

Dylan recently referred to The Kashmir Files as “hatemongering junk of no artistic quality” and said that Anurag Kashyap was correct to hope that the movie is not chosen as India’s official entry to the 2019 Oscars in order to protect what little goodwill there is left for India. On August 17, Dylan posted in response to Vivek Agnihotri’s tweet regarding Anurag’s statement “Actually, if “chosen” by the “neutral” board, it’s (hateful, revisionist) garbage with no creative merit and will shame India even more. Anurag Kashyap is merely attempting to protect what little goodwill the nation still has.” In 2020, Dylan will broadcast the Netflix documentary series Bad Boy Billionaires India.

In a recent interview with ETimes, Vivek responded to a question concerning Dylan’s remark by saying, “This is all lobbying and politics. I know more about politics than most directors. Credit to you, mujhe (Please give me that much credit). Even if I’m not a brilliant filmmaker, I have a grasp of politics. Tell me, how did someone watching my movie from Canada notice it. That implies that someone is lobbying.

The Kashmir Files, which was directed by Vivek Agnihotri, starred Anupam Kher, Pallavi Joshi, Mithun Chakraborty, and Darshan Kumar in the lead positions. The movie had a mixed reception upon release but went on to become one of the highest grossing Hindi movies of the year. Since the Covid-19 pandemic, it is the only Hindi movie to surpass the 300-crore mark.

After his birth, Dia Mirza was not permitted to hold her son for two and a half months

Teaser for Vikram Vedha: Hrithik will be merciless because Saif is after him