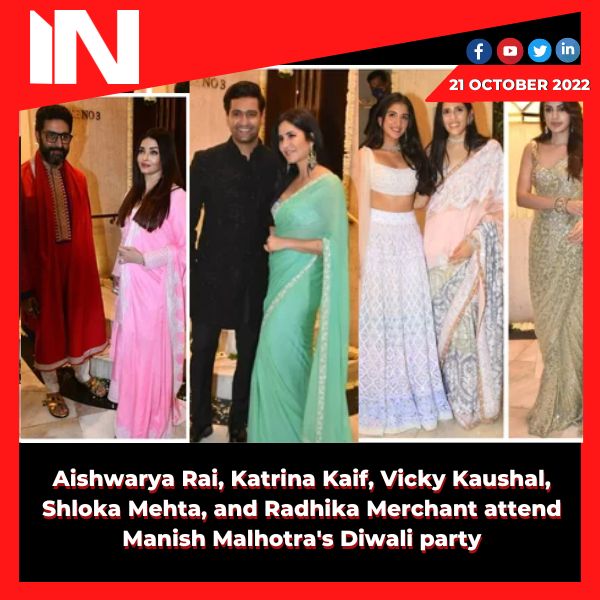 Many Bollywood stars gathered to attend the star-studded Diwali party hosted by designer Manish Malhotra at his home on Thursday, as they continue to jump from one Diwali party to another. All joined the fashion designer in their traditional attire, from Aishwarya Rai and Abhishek Bachchan to Katrina Kaif and Vicky Kaushal.

For the occasion, Vicky Kaushal wore a black sherwani. Katrina followed him wearing a plain turquoise saree. Outside of Manish’s home, the couple posed for photos with the paparazzi. Karisma Kapoor, who was wearing a crimson saree, and Katrina were also seen greeting one another. Isabelle Kaif, Katrina’s sister, was also spotted wearing a creme lehenga.

At the party, many more people were seen wearing sarees. Kajol, Rhea Chakraborty, and Kiara Advani all donned various designs of shimmering gold to the event. Diana Penty chose a green saree, while Kriti Sanon wore a sheer lavender one. Athiya Shetty wore a blue saree as well. When Genelia went to the party with her husband Riteish Deshmukh, she was seen wearing a crimson sari. Malaika Arora looked gorgeous in a black sari with an

The gathering was attended by Jackky Bhagnani and Rakul Preet Singh as well. She decided on a vibrant lehenga for the event. As she arrived with her spouse Dr. Shriram Nene, Madhuri Dixit was also seen wearing a saree. Also spotted were Ayushmann Khurrana and Tahira Kashyap. Kartik Aaryan and Siddhant Chaturvedi attended the party, along with Janhvi Kapoor’s complete entourage, including her sister Khushi Kapoor, cousin Shanaya Kapoor, and Suhana Khan.

Kangana Ranaut, a talented actress, is receiving full praises for her movie, Kantara.

As her daughter Ziana recovers from dengue, Charu Asopa posts a photo of her from the hospital, writing, “Had a really terrible time.”