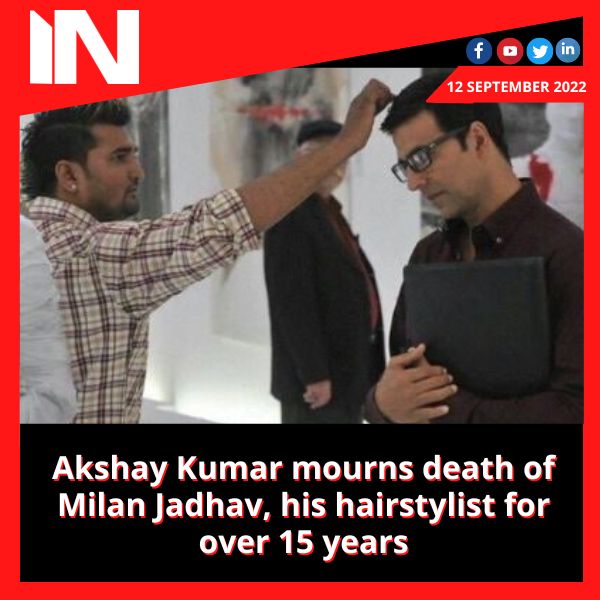 Actor Akshay Kumar has lamented the passing of Milan Jadhav, who had been his hairstylist for more than 15 years. Akshay shared a vintage image of himself and Milan on Twitter. As Milan styled Akshay’s hair in the photo, he stood with his head tilted to one side. The two appeared to be at a shooting location.

“You stood out of the crowd with your funky hairstyles and infectious smile. Always ensured not even one hair of mine was out of place. The life of the set, my hairdresser for more than 15 years, Milan Jadhav. Still can’t believe you’ve left us…I will miss you Milano (heartbreak emoji). Om Shanti (folded hands emoji),” Akshay wrote alongside the photo when he shared it on social media.

Fans of Akshay also paid homage to Milan. A fan wrote, “Milan was Too Good….Om Shanti,” while another added, “It’s quite difficult to hear about people who pass away at such a young age. RIP. Milan.” A Twitter user added, “I remember him. Our Humko Deewana Kar Gaye was his first film and then onwards he has been a part of your journey to date. May his soul Rest in Peace. Tragic.”

Akshay visited Milan’s salon in a video that Milan released on his Facebook page in 2019. Akshay and other people can be seen greeting Milan as they enter the salon in the footage. In 2017, he posted a photo of himself and Akshay to his Instagram profile with the caption, “Akshay sir my employer in my salon in Milan.”

The following movie featuring Akshay will be Ram Setu, starring Jacqueline Fernandez and Nushratt Bharuccha. This year’s Diwali celebration will coincide with the release of the movie. He will also appear in the Hindi version of Suriya’s Tamil film Soorarai Pottru alongside Radhika Madan. Paresh Rawal will reprise his role from the Tamil original in addition to Akshay and Radhika. In addition, director Sudha Kongara is back to helm this picture. In April, the shooting started.

Cuttputlli, Akshay’s most recent movie, debuted on Disney+ Hotstar earlier last month. The movie is directed by Ranjit M. Tewari and is produced by Vashu and Jackky Bhagnani, Deepshikha Deshmukh, and Pooja Entertainment. Sargun Mehta and Chandrachur Singh have significant parts in the film Cuttputli as well.